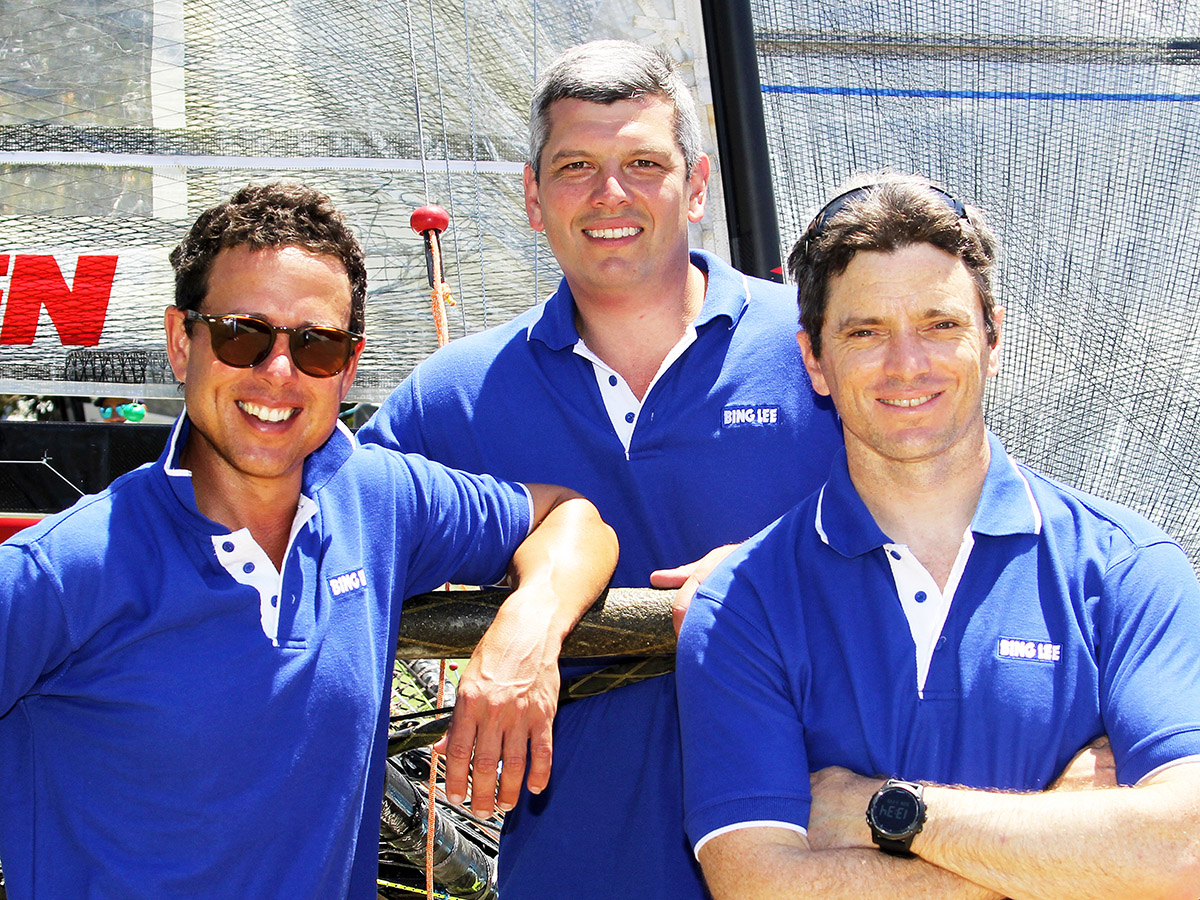 Three long-time friends and sailing champions have all finally come together in the one boat as they set their sights on winning the 2019 JJ Giltinan (world) 18ft Skiff Championship on Sydney Harbour from March 2-10.

Skipper Micah Lane, sheet hand Scott Babbage, and for’ard hand Peter Harris have formed a powerful team in a skiff which has been supported by a first-time 18ft Skiff sponsor, Bing Lee.

Micah Lane and Peter Harris grew up together sailing Sabots and Flying 11s out of the Vaucluse Amateur 12ft Skiff Sailing Club. Micah won the Sabot Nationals in 1993-1994.

The two young sailors later had their first season in the 18s, when they sailed together on Rosemount Wines in 2002-2003. Micah was on the helm and Peter in the bow.

Over the next few seasons, Peter went on to crew for John Sweeny, firstly with Seve Jarvin on the sheet, before Peter introduced Scott Babbage into the 18s on Churchill’s Sports Bar in 2005.

Micah Lane then won the 2006-2007 Australian 18ft Skiff Championship with Macquarie Real Estate, and followed that success with a third place at the 2012 JJ Giltinan Championship in Appliancesonline.com.au.

After a few seasons out of the 18s, Micah is back this season and enjoying the return: “I came back for this season looking to enjoy the sailing first and foremost rather than focusing on results. To have had a couple of wins and a few top five positions is just awesome.

“I certainly have two of the best sailors in the fleet on board with me. They are brilliant. There is no excuse for me on the tiller.

“This is definitely one of, if not my most enjoyable seasons I have sailed so far. It’s such a great fleet and an opportunity the club gives us to sail these great boats each week.

“The new mix between traditional long races and short course racing is great and something I always thought we needed in the skiff season. It promotes tactics and boat handling more than raw boat speed and gives everyone more chances of winning or losing, which is better for the spectators.

“Our goal in the JJs is to enjoy it, keep the boat upright and hope our 2014 sails hold together.”

Peter Harris and Scott Babbage have teamed with great success on a variety of skiffs, and this year, on Bing Lee, is the 7th season together for Peter and Scott.

Their successes began in a three season combination with John Harris (Peter’s brother) on Rag & Famish Hotel. The Rag’s team won the NSW Championship and had a fourth finish at the JJ Giltinan Championship in 2010, even though they were the only team to win two races during the championship.

Scott Babbage has a formidable sailing record, both as a top-class sheet hand in the 18s, and a world class Moth sailor.

As proof of Scott’s talent, he had his first, and only season (so far) as an 18ft Skiff skipper in 2017-2018 when he led a young, and relatively inexperienced 18ft Skiff team, to victory with The Kitchen Maker-Caesarstone in the NSW Championship on Sydney Harbour.

Scott is more than happy to be back in the 18s again this year: “I was a late call-up for the 18’s this season as I had commitments working for Sail GP and getting a new Moth on the water, but the opportunity to sail an 18 again was too good to miss.

“These are fantastic boats and the chance to sail with Pete again and an experienced guy like Micah was a no brainer.

“Our sails are past their best years so that’s a little disappointing that we could not get new sails before SRD, but we will try and give it our best shot.

“Knowing what it takes to win hopefully we can work well together as a team, communicate, be positive and use the advantages of both long course and short course racing and my local knowledge to get the best out of us and our boat. I look forward to the challenge!”

The team recently finished fifth in the Australian Championships, but the overall result wasn’t a true indication of how the Bing Lee team performed, as some race results were marred by a few gear problems.

Asked about the team’s chances at the JJs, Micah said: “The boat is fast enough to win if we stay on the right side of shifts, Scott and Pete are as good as they get in their positions so if we can put a few good races together we should get a good result for our sponsor Bing Lee.

“If we have fun I think we are a good chance of a top five result and won’t complain if we get a podium or better.”

Peter is also enthusiastic: “I am really looking forward to these JJs. Sailing with Scott again for our 7th season is great fun and we have a great understanding of each other. I certainly enjoy crewing with him and it’s great to have Micah on the helm.

“Micah and I grew up together and sailed our first year in 18s together so it’s fantastic to be sailing as a team on Bing Lee. I’m the calming influence on these two so hopefully I’ll get the best out of them.

“Our expectations are modest. We have had limited preparation as a team and our sails are extremely old and tied but if we put the boat on the right parts of the race track, use our years of experience and have some luck we could be at the pointy end of the fleet come the end of the regatta.”

This ‘new’ team is a boost to the Australian 18 Footers League fleet in 2018-2019 and brings another new sponsor to the club.

Bing Lee is a 62-year-old family-owned retail business, which has a strong record of sport sponsorship in major local sports. Over the years, Bing Lee has sponsored the Sydney Swans in the AFL, the Roosters and Bulldogs in the NRL, Sydney FC in the A-League, V8 Supercars, as well as the Swifts and Giants with Netball NSW.

Bing Lee’s CEO, Lionel Lee said: “It seemed only logical that an iconic NSW based business like Bing Lee should sponsor an iconic class of sailing, like the 18ft Skiffs on Sydney Harbour.”

The Australian 18 Footers League welcome both the team and the new sponsor as part of the strong team of local challengers to win back the JJ Giltinan from the New Zealand champions of 2018.

The 2019 JJ Giltinan Championship is one of the most eagerly awaited regatta in the 18s for many years and a large spectator fleet is expected to follow the racing on Sydney Harbour.

NEXT WEEK IS THE 2019 JJ GILTINAN CHAMPIONSHIP

The club will have a spectator ferry following each of the seven days' racing, leaving Double Bay Public Wharf at 2pm.