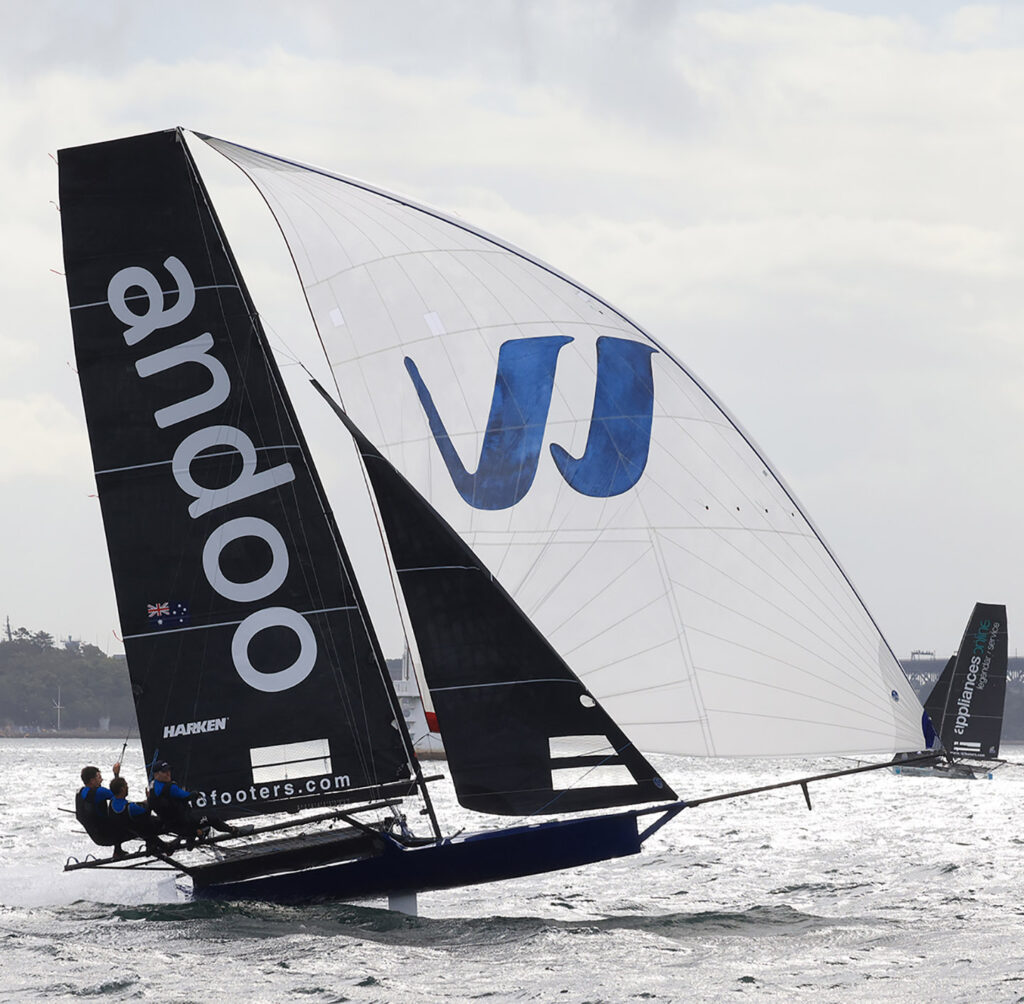 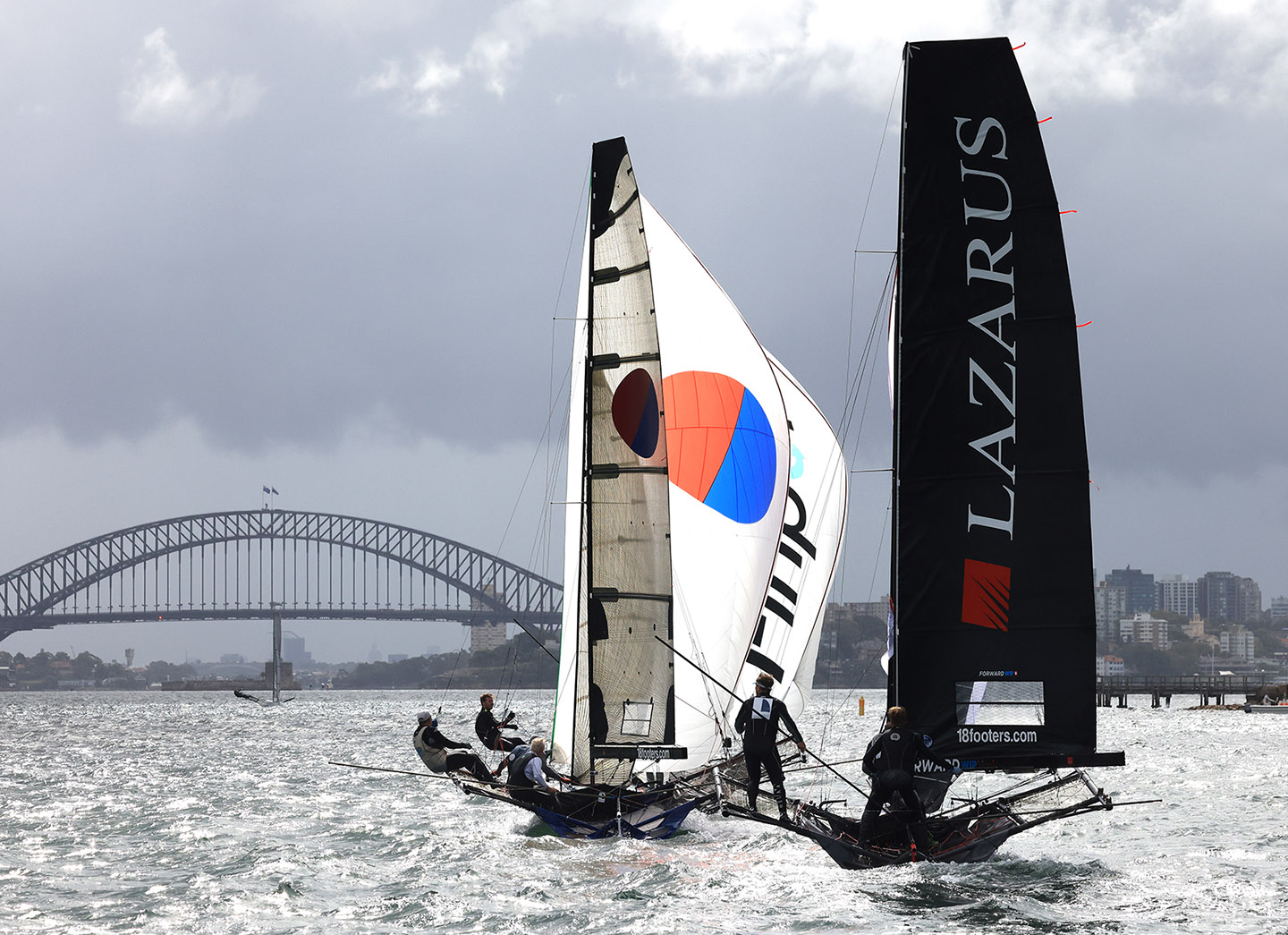 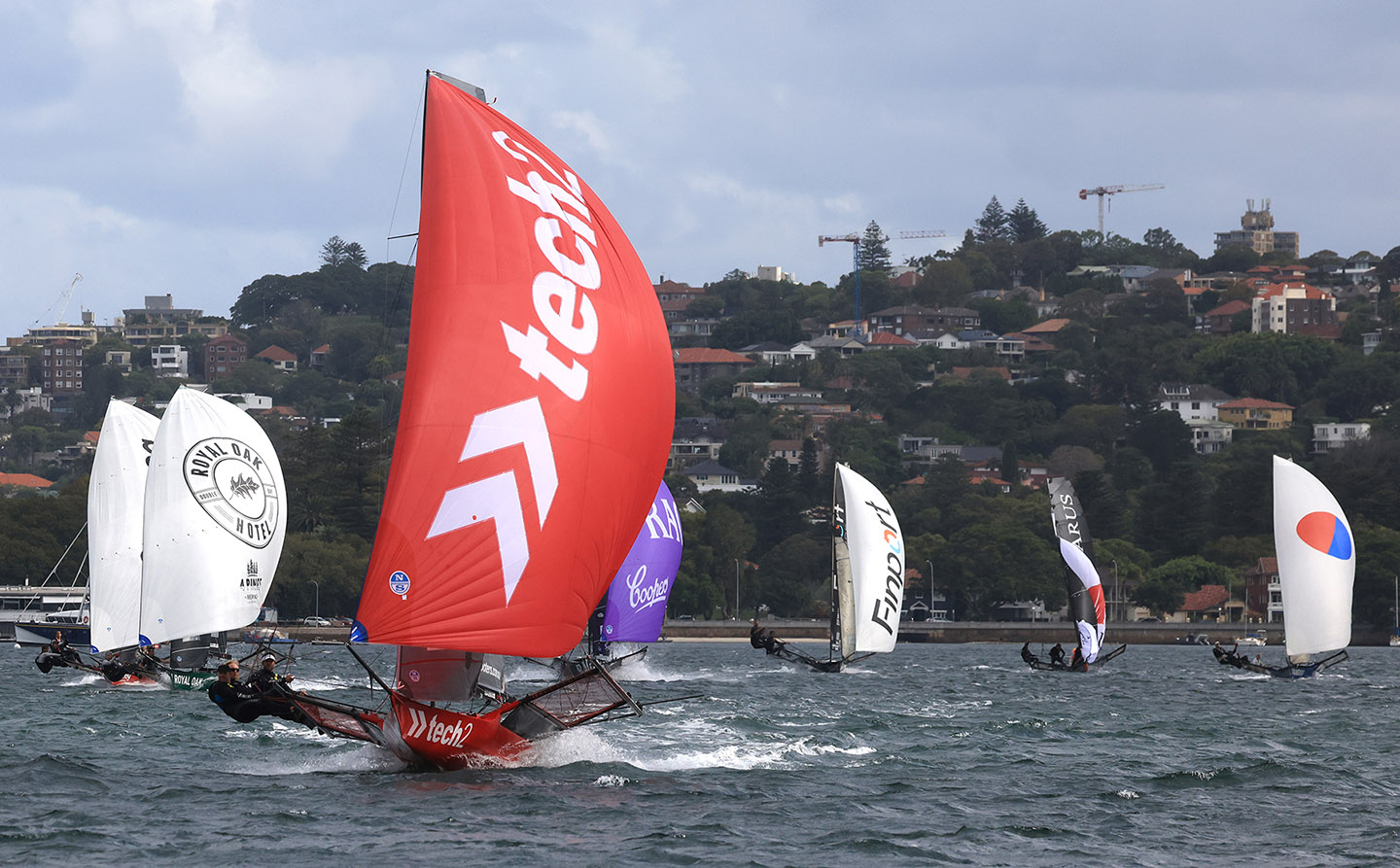 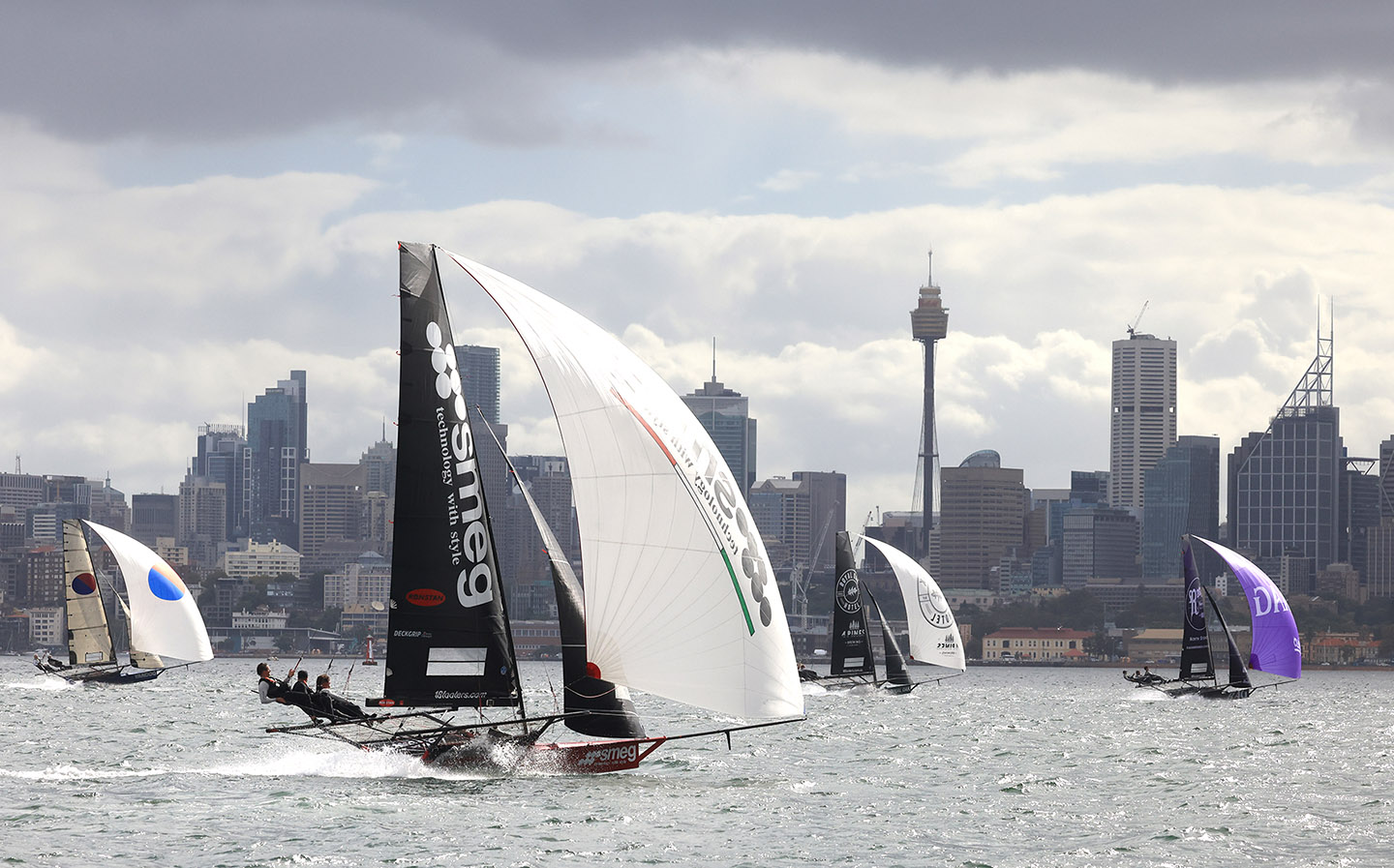 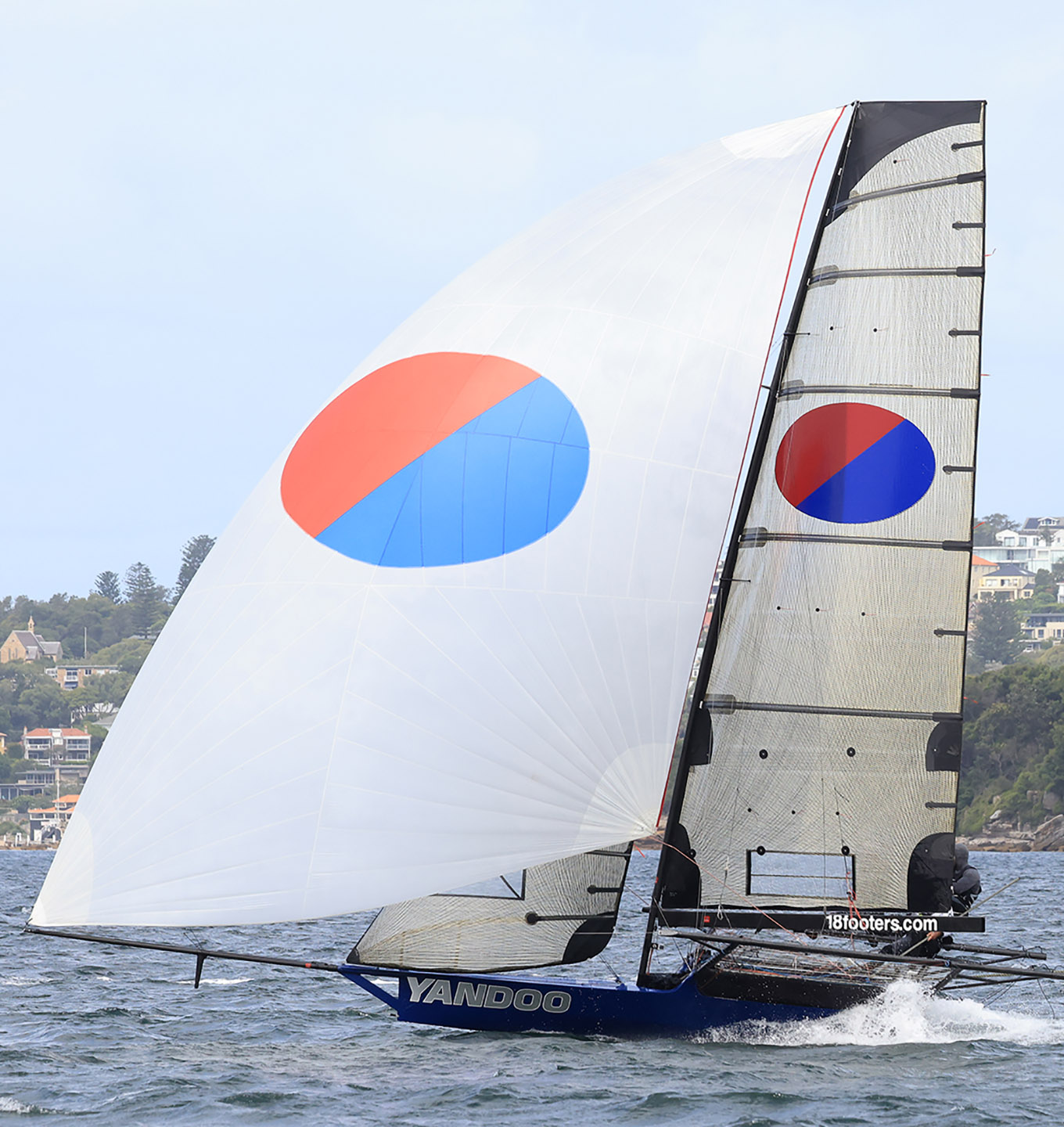 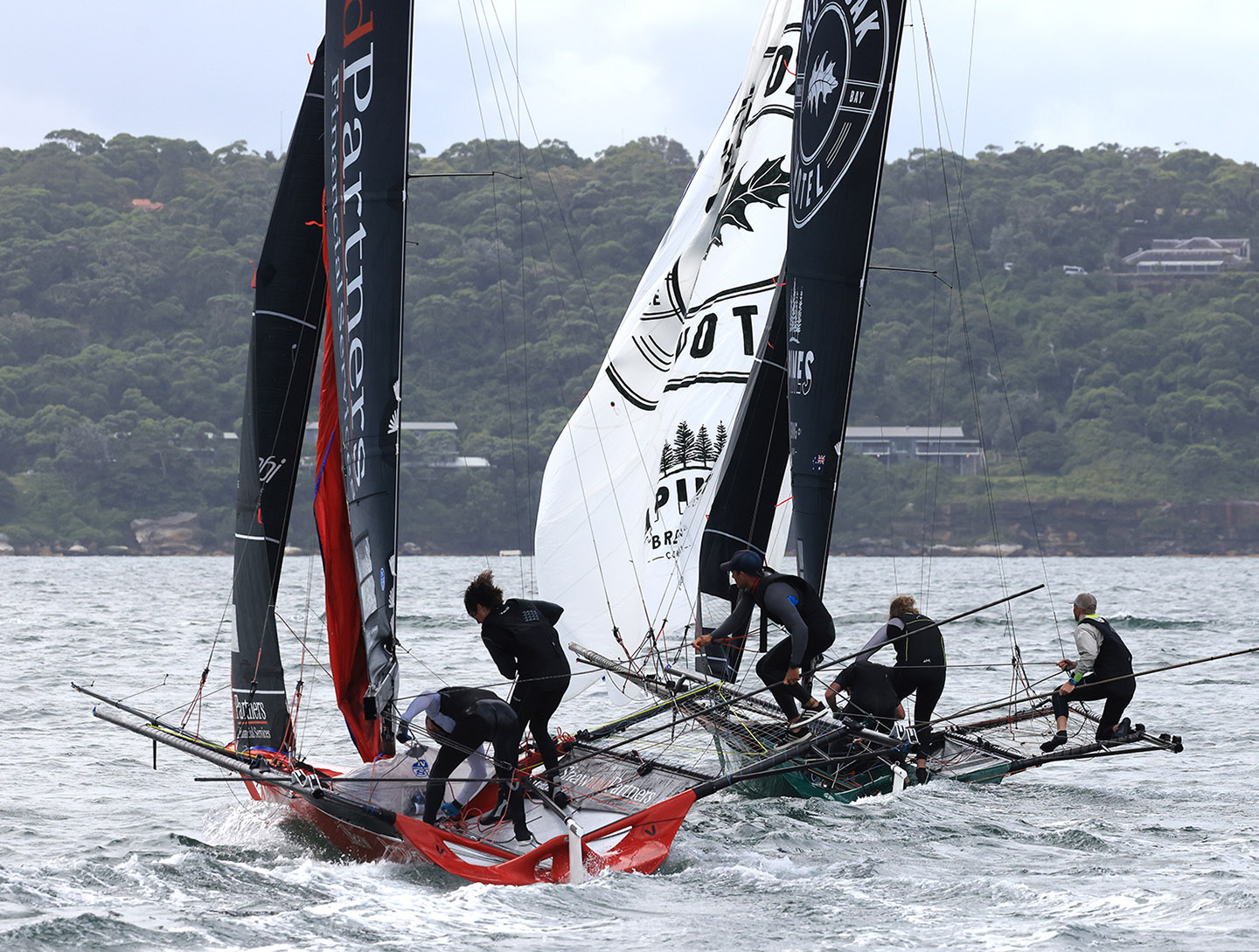 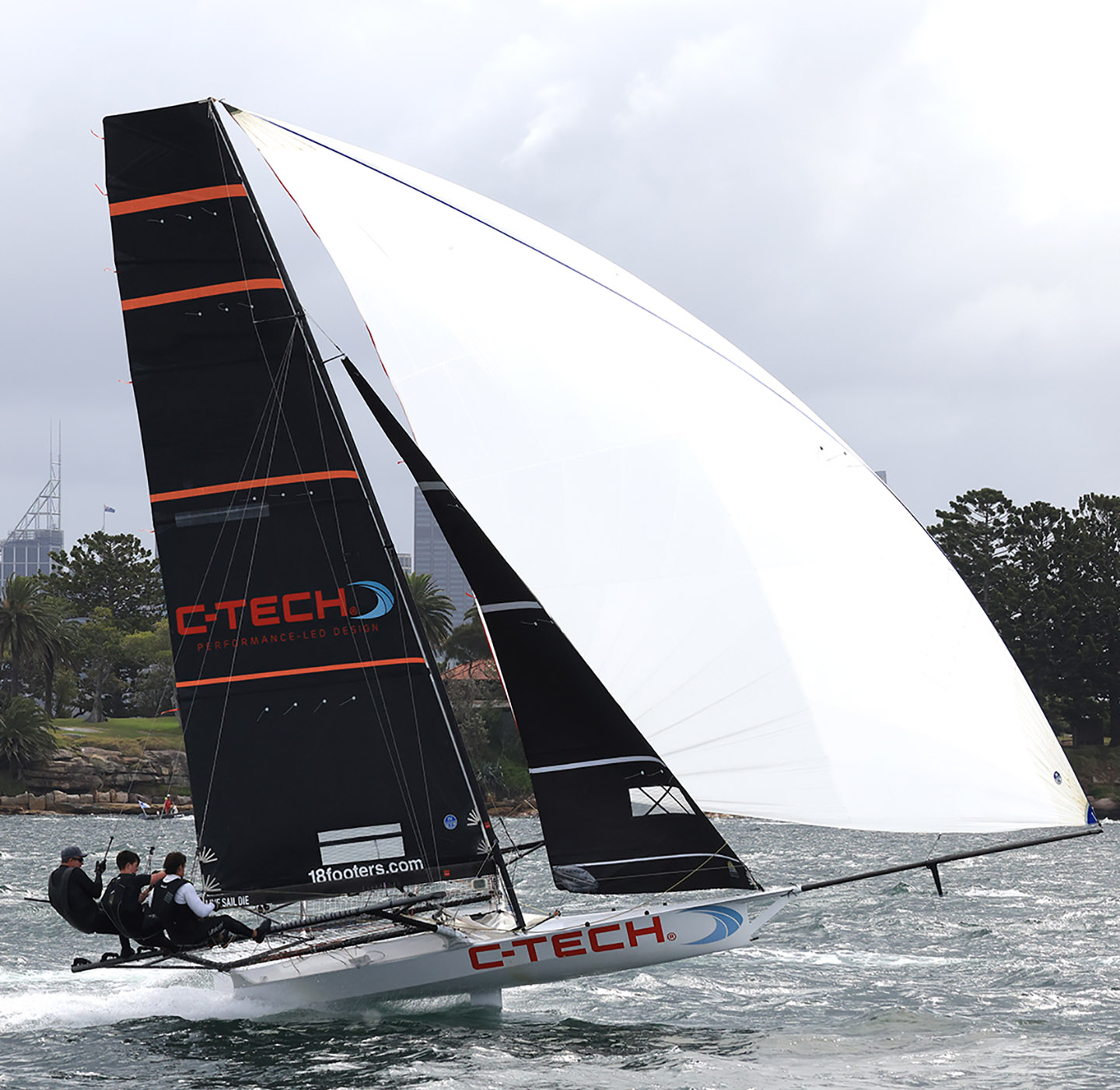 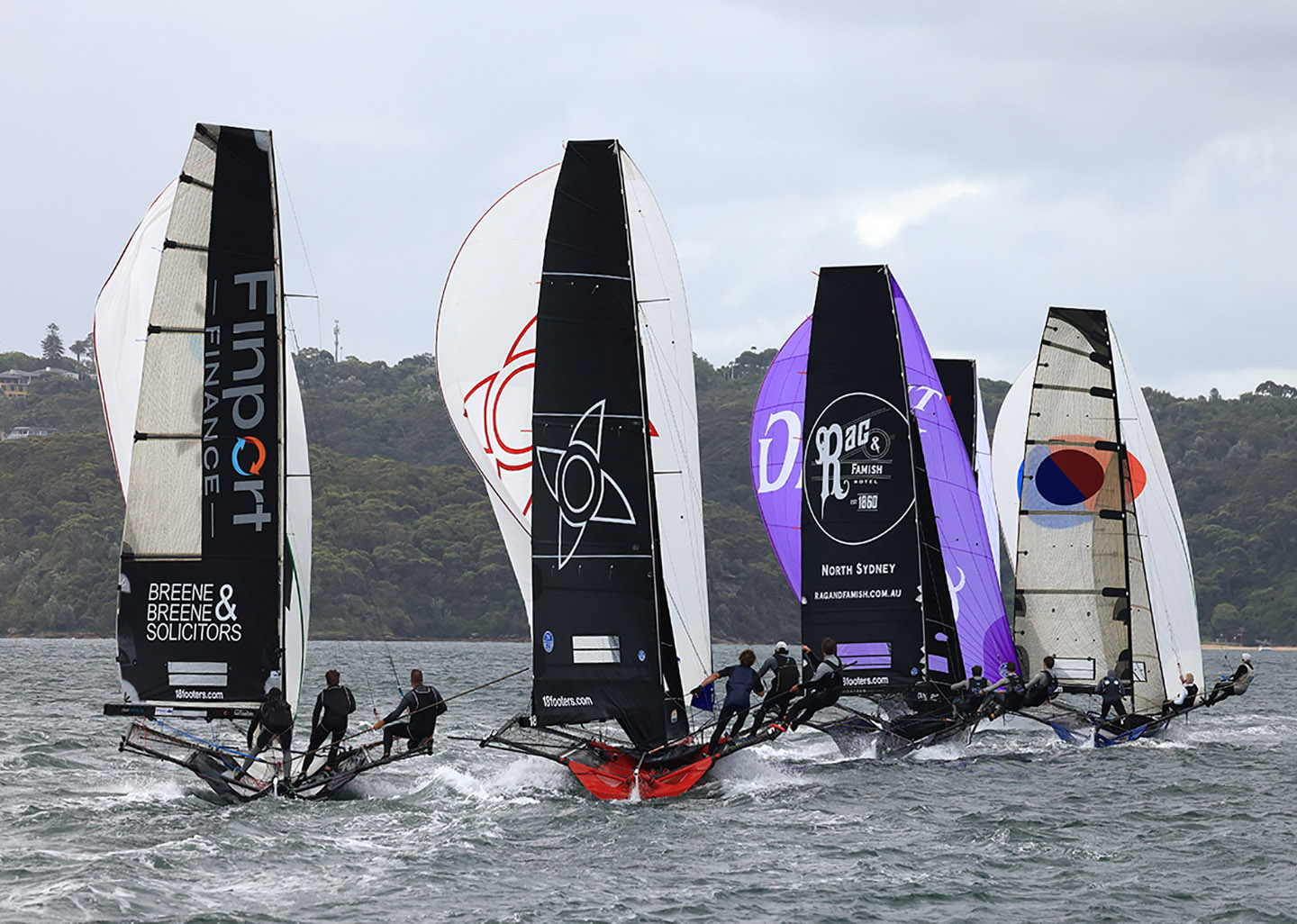 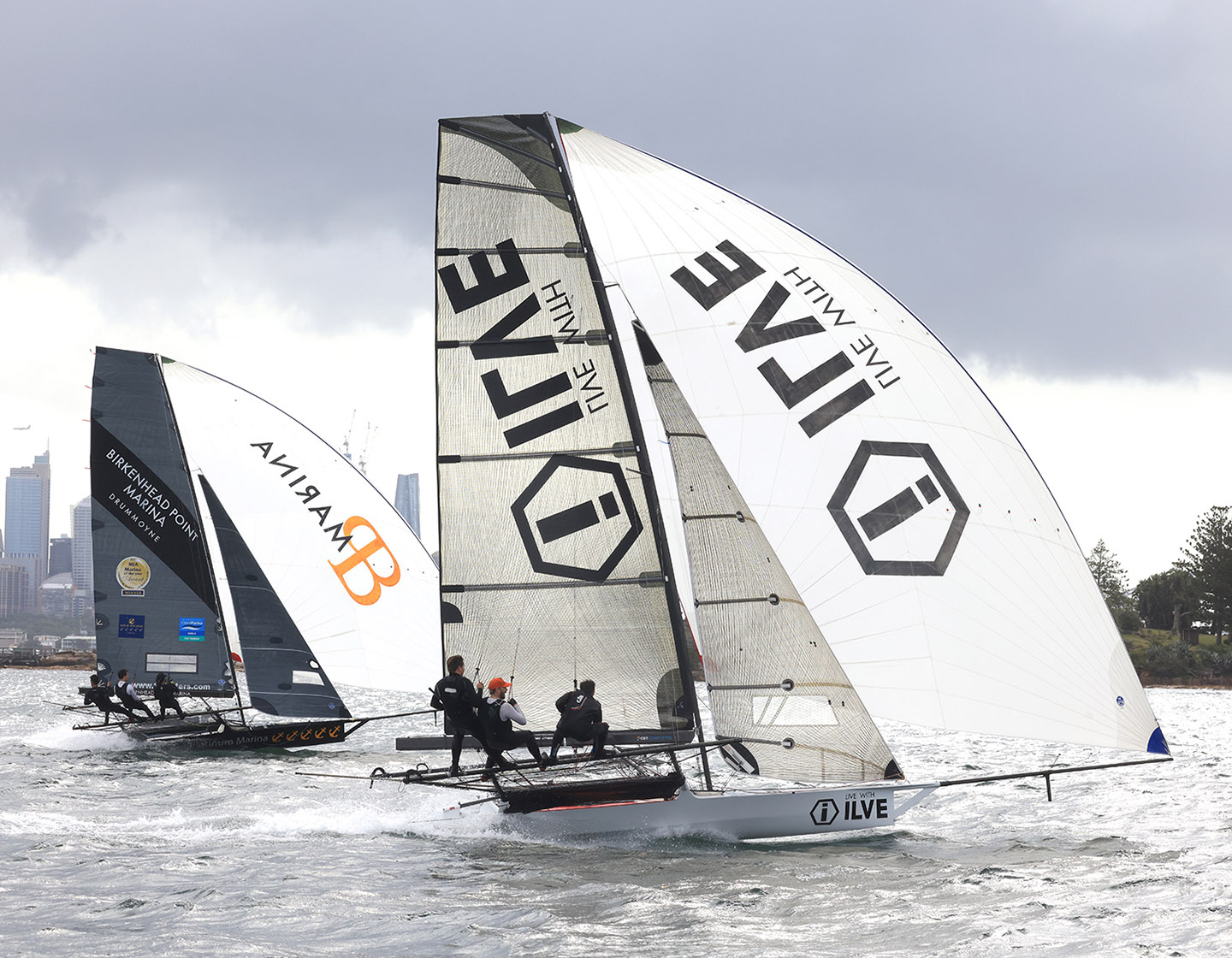 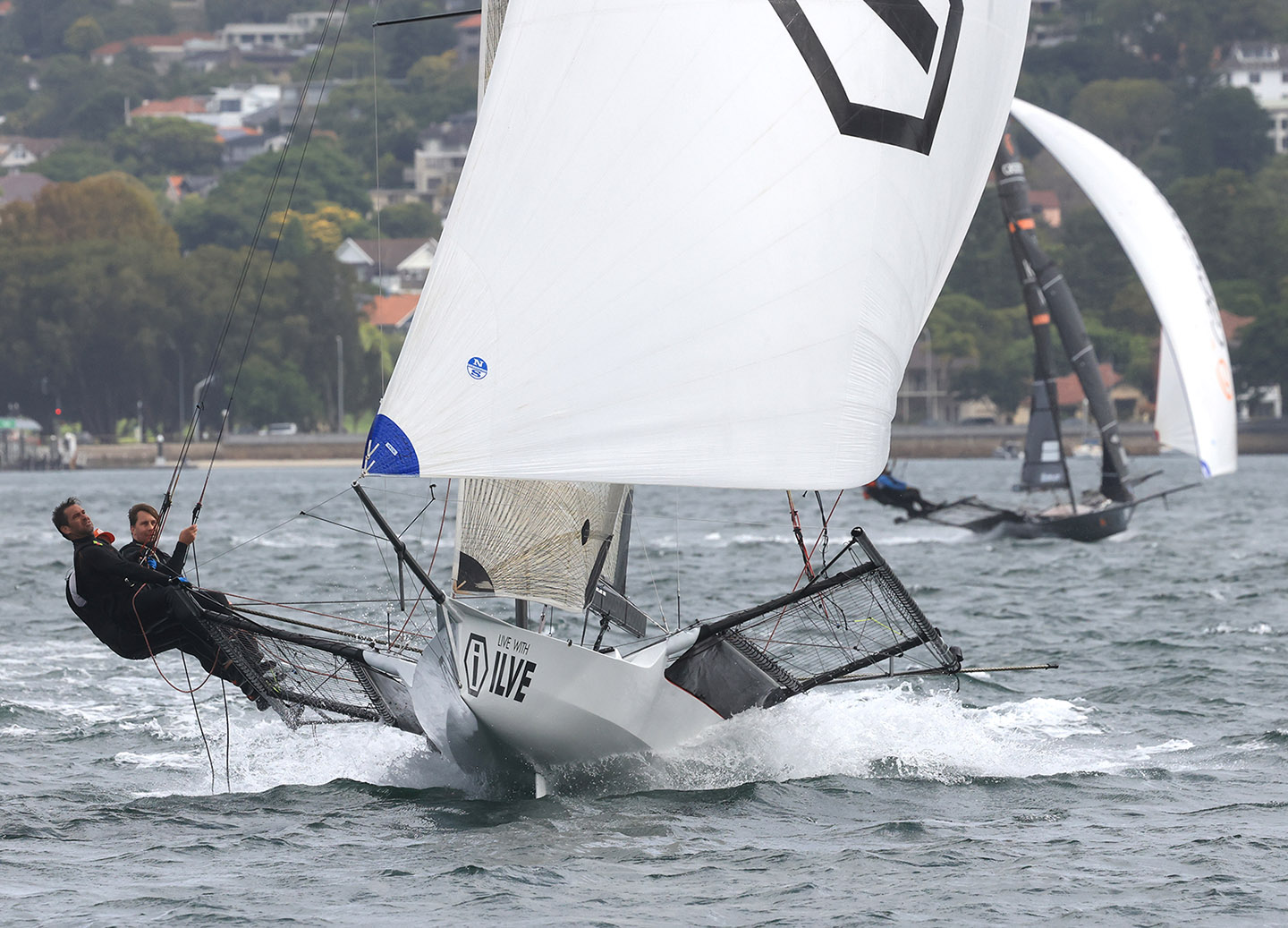 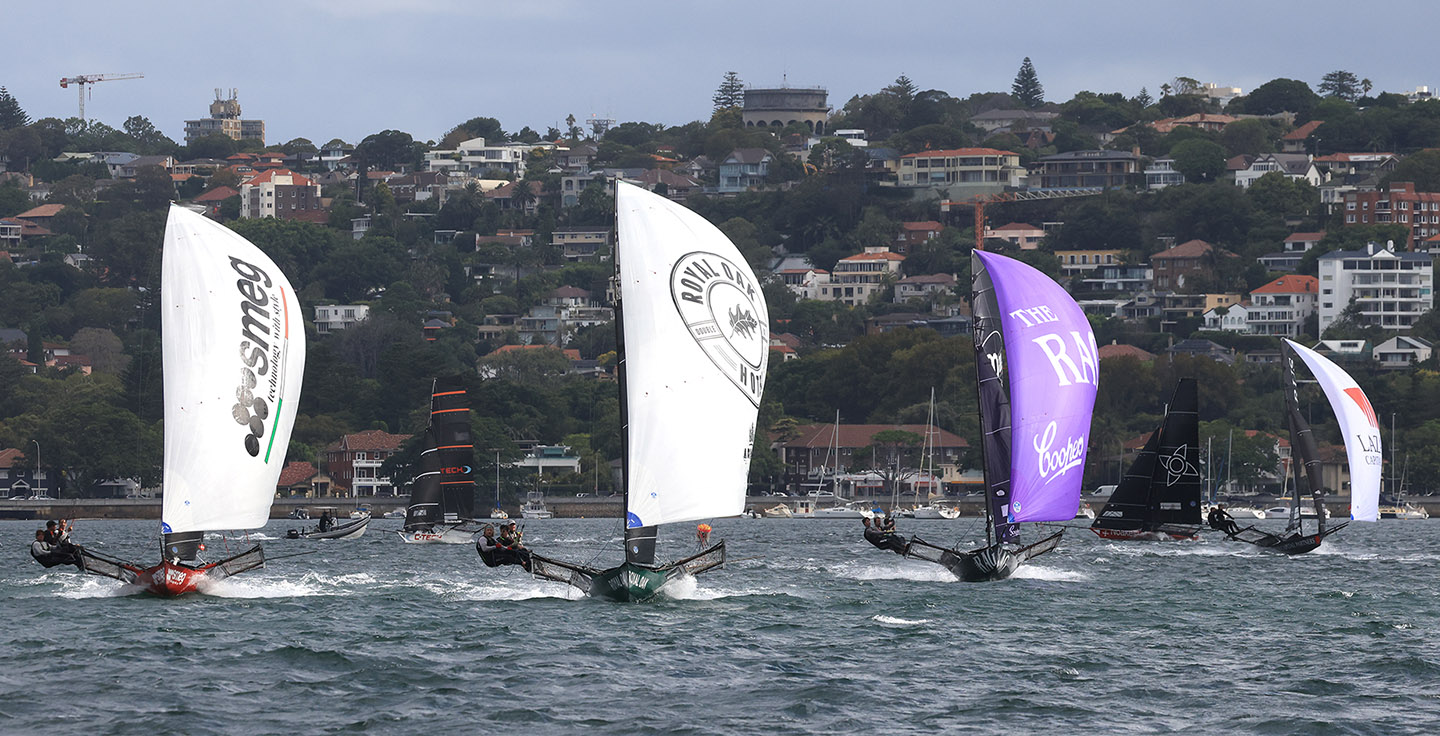 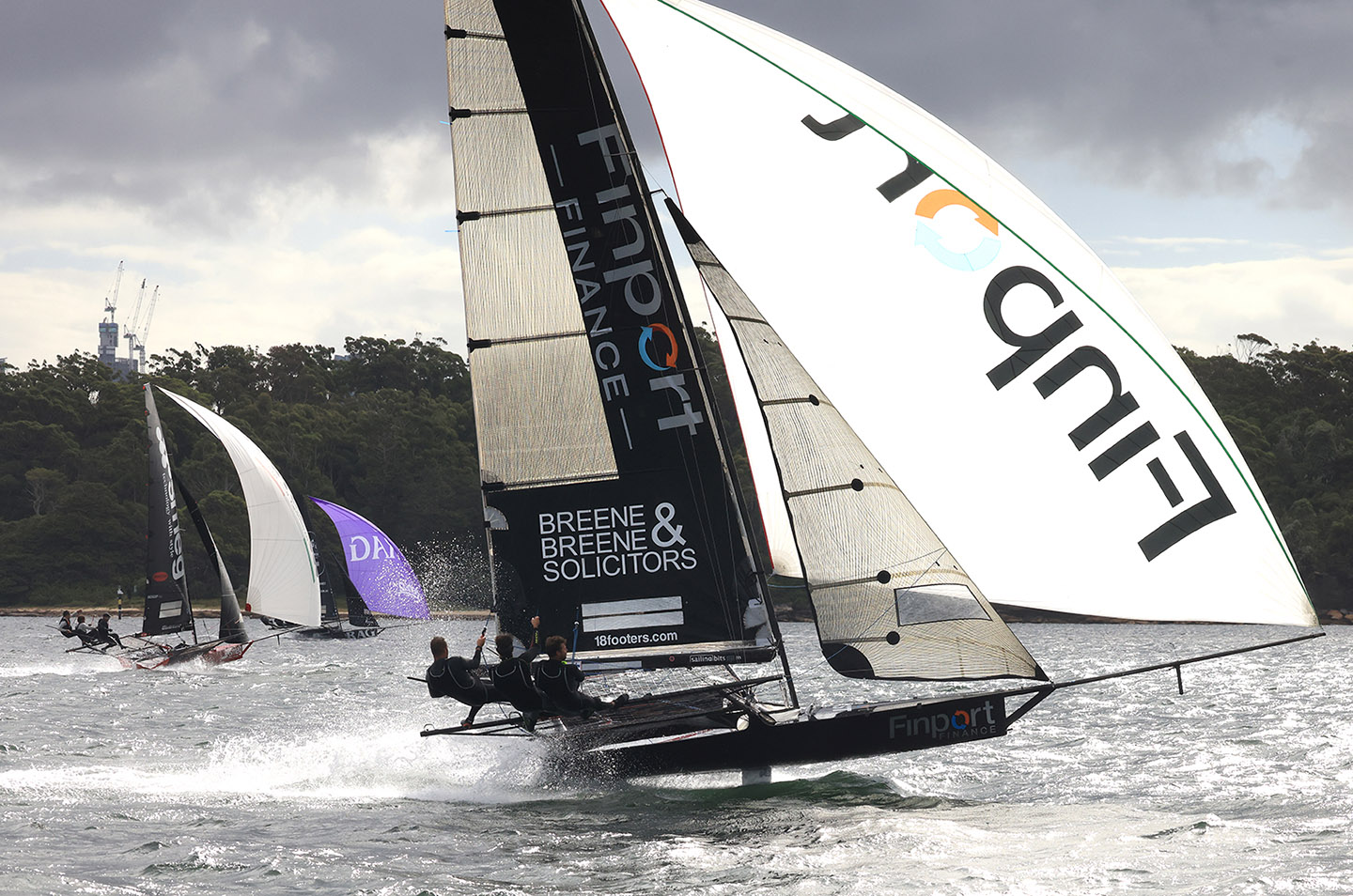 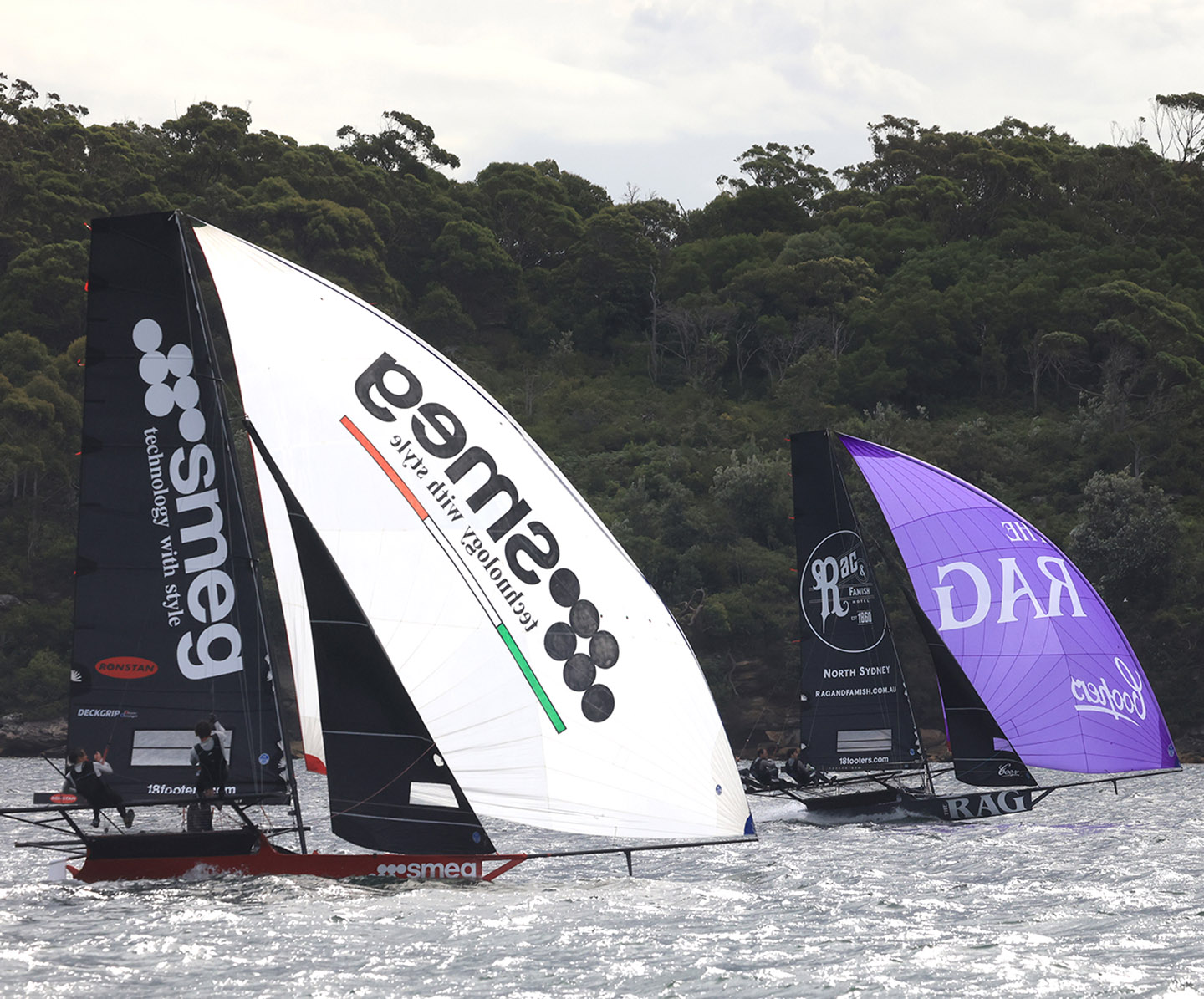 The Andoo team of Seve Jarvin, Matt Stenta and Sam Newton continued the outstanding form it has shown over the first two days racing with another impressive display in today’s Races 4 and 5 of the Australian 18 footer Championship on Sydney Harbour.

On total points, with three wins and two other podium placings from the five races sailed so far, Andoo has already established a 19-points lead over the defending champion Tech2 team of Jack Macartney, Charlie Wyatt and Lewis Brake, with the rookie Rag & Famish Hotel team of Harry Price, Josh McKnight and Harry Hall in third place.

Allowing for each team discarding its worst performance to date, Andoo has a total of five points, Race 2 winner Smeg (Michael Coxon) is next on 11 points, followed by Tech2 on 12, Rag & Famish Hotel on 16, Noakesailing (Sean Langman) and Lazarus Capital Partners (Marcus Ashley-Jones) tied on 22.

Unfortunately, the first attempt to start Race 4 was abandoned at the first windward mark as the fleet had been split into two distinct groups and it wasn’t until one hour after the scheduled start time that today’s racing finally got under way.

The Oak Double Bay-4 Pines (Aron Everett, John Cooley and Charlie Gundy) were back to best form and despite strong challengers throughout the race were able to hold off Shaw and Partners Financial Services (Steve Thomas, Lindsay Stead and Tom Quigley) to win by 6s, with Andoo a further 16s back in third place.

Many in the fleet tacked onto port soon after the start and the fleet was split on each side of Shark Island as it headed into the Rose Bay windward mark.

Smeg grabbed a narrow lead at the bottom mark when Finport had a slow mark rounding but The Oak was close behind Smeg at the left hand buoy, while Andoo led Shaw and Partners at the right hand buoy.

Once again, the fleet had different ideas about which side of Shark Island was better but it really didn’t matter as there were only 8s separating the new leader, The Oak Double Bay-4 Pines from the second placed Shaw and Partners.

Andoo and Smeg were next and close together and didn’t help each others chances as they battled on the final run to the finish line behind The Oak and Shaw and Partners.

In the latter race, Andoo won the start with some superb work by skipper Jarvin and the team and was never headed over the entire course to win by a very impressive 1m45s margin over Tech2 with Rag & Famish Hotel another 26s further back in third place.

The 100th Australian Championship will continue next Sunday, February 13, with the final two races (Races 7 and 8) of the championship.

Spectators can follow the racing on board the club’s spectator ferry on Sunday February 13, however due to the COVID-19 policy, numbers are limited.  Booking online through the club’s website is essential: http://www.18footers.com.au/18-footers-sailing/spectator-ferry/