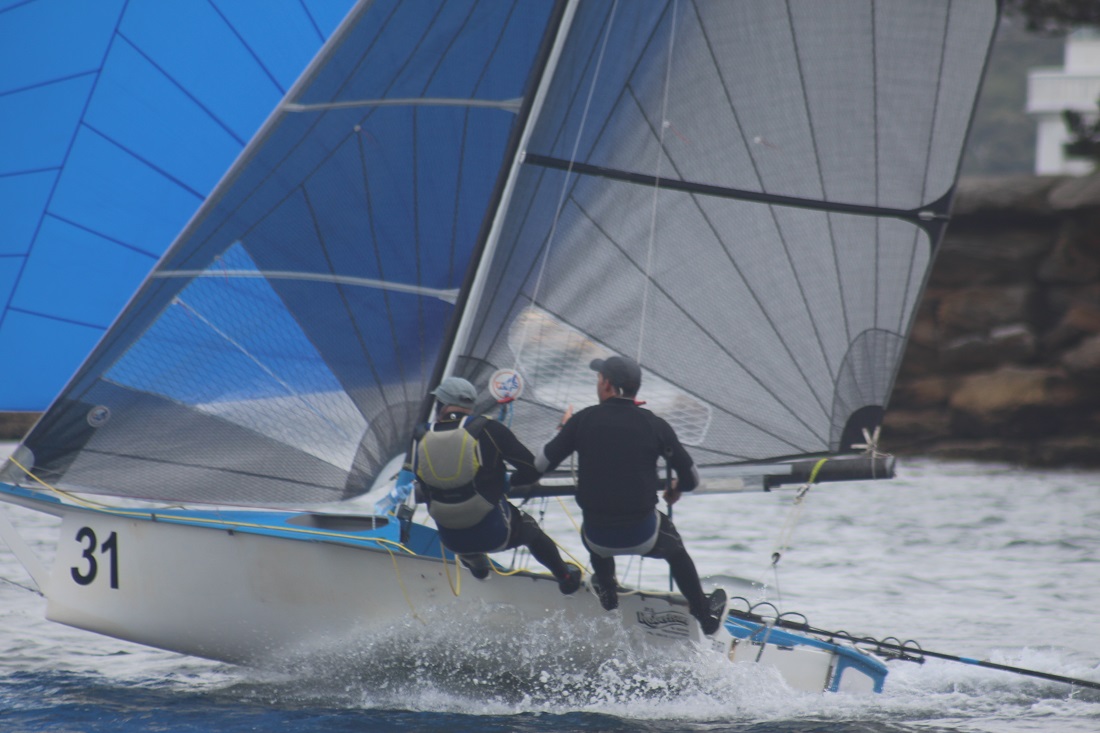 A ship seen by some, but not by others competing in the Your Move Conveyancing 12ft Skiff Interdominion today, played a big part in determining the outcome of Race 5, which in turn affected the overall standings.

The gun Sydney Sailmakers crew of Nick Press/Andrew Hay from Lane Cove 12ft Sailing Skiff Club won the earlier Race 4, but while leading Race 5, were in a blind spot, only spying a ship at the last minute. Unable to sail their course or get around the ship, the pair was pushed right down the pack, but recovered somewhat.

“We won first race, got a good start in the top bunch, rounded the first mark in front, with Brett (Hobson and Jeremy Jones on Geotherm) second, Ginge (Alex Vallings/Sam Tretheway on C-Tech from New Zealand) there too,” Press, from Gladesville said.

“We had a good downwind,” he said after executing a gybe-set inside his opponents and led down the run to the bottom mark.

“Ginge went in the drink, and there went his chances. Brett was right on our heels though, and we had tacking duel up the work, but managed to stay in front and hold on for the win.”

All agreed conditions were the best of the regatta so far, with a beautiful 15-18 knot nor’ easter. “You couldn’t ask for better,” Press said after two days of trying overcast weather.

Into Race 5, and Sydney Sailmakers was again leading, but experienced something Press and Hay had no control over: “We sailed into Taylors Bay and couldn’t see this big moving block of flats (the ship),” Press explained.

“Ginge and a few others went around the east (near Shark Island) and could see it. We dropped back to 12th or 13th and ended up seventh,” said an obviously disappointed Press.

That race, in all probability, cost him the Interdominion lead. Geotherm, representing the host club, the Sydney Flying Squadron, is on 12 points holding a one-point advantage over his perennial major rival after scoring fifth in Race 5.

“After capsizing in the first race, we came out and won the second,” Vallings, the defending Interdominion champion, said. “Going downwind, a big ship went out that affected some.

“We got a terrible start, but it all changed at Bradleys and opened things up a bit. We got into top five – and were fourth at the top mark – close behind the leaders, then the ship happened. That’s where we got in front – we went down Shark Island side, so we could see it – others couldn’t see it. Ugly Stick was up with us and we battled upwind, but we stayed in front.”

Vallings has been a driving force in the development of the 12 footers, but he and Tretheway have struggled a bit, with fifth, ninth, 10th and seventh places before winning Race 5, moving  them up to fourth place overall.

He says, “The season hasn’t been good in New Zealand, so we only went out for one sail before coming to Sydney.” And he has a new crew. “Tomorrow won’t be easy; we’re looking at a challenging 20 knot southerly. It will be testing on the 12s,” ends Vallings.

On who might win, Nick Press says: “Brett (Hobson) is the man to beat. Ginge and Brad Phillips (Terms & Conditions) are getting better by the day. Carbon Chandlery (Richard Billet/Ben Cross) are still finding their way, but are not lacking in talent either.”

Terms & Conditions is a new crew who are moving upwards and lead the handicap event. Both have sailed skiffs, but independently.

Phillips says: “We had a slow start, but we only had two training sessions beforehand.  We’re getting the crew work in order and improving. We just have to point the boat in the right direction. It’s a quick boat and we’re enjoying sailing together.”

Crew, Harry Bethwaite, is the son of former skiff champion and skiff designer (including the Olympic class 49er), Julian Bethwaite.

A spectator ferry will follow the final day of racing – 12th January. Tickets for the ferry can be purchased via the Sydney Flying Squadron website: www.sydneyflyingsquadron.com.au . The ferry will depart the wharf at the club at 2pm. Drinks can be purchase on board. We recommend having lunch at the club (restaurant or cafe) prior to heading out on the ferry.