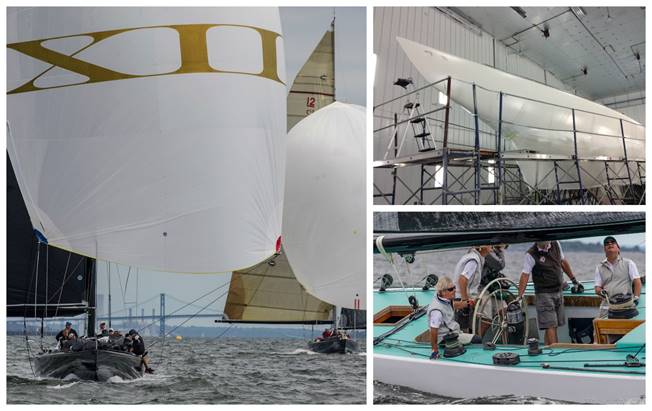 When the 12 Metre World Championship comes to Newport, Rhode Island this summer from July 8-13, the significance of the venue will not be lost on sailing buffs, or for that matter, on sports historians in general.

The America’s Cup, one of the most famous competitions between countries, was held here in Newport 12 times from 1930 to 1983. For nine of those times, from 1958 to 1983, the boat used to determine the winners was the 12 Metre, a single-masted sloop of approximately 68 feet (21 metres) in length.

During the 12 Metre Cup years, thousands of sailors, support teams, families and spectators from around the world swarmed lower Thames Street ,and wharves such as Bannister’s. This is where the 12 Metres and their teams headquartered during races that determined a final defender and challenger destined to spar one-on-one for the coveted silver ewer that was 'The Cup'.

The most memorable Cup in Newport was unfortunately its last; 1983 marked the first winning challenge to the New York Yacht Club, which had successfully defended the Cup over a period of 132 years.

An Australian syndicate representing the Royal Perth Yacht Club wrested the precious trophy from its decades-old resting place, breaking a winning streak that was the longest on record in any sport.

For July’s 12 Metre Worlds, teams from around the world again will flock to Newport. They will sail a series of fleet races, held over five racing days, to determine winners in four Divisions: Grand Prix, Modern, Traditional, and Vintage.

They will sail the same America’s Cup courses – 24 miles or so in length and plotted beyond the mouth of Narragansett Bay and off Brenton Reef in the Atlantic Ocean – that long ago brought notoriety to scenic Newport and its surrounding waters.

A look back from the sailors
With the Cup’s historical ties to Newport, it’s no surprise that many of the sailors planning to compete at the Worlds are veterans of 12 Metre America’s Cup campaigns.

Lexi Gahagan started his America's Cup career in 1980 when he successfully defended the Cup as bowman on Dennis Conners’ Freedom (US-30). At the 12 Metre Worlds he will sail in the afterguard of New Zealand (KZ-3), entered in the four-boat Grand Prix Division and owned and driven by Gunther Buerman (USA).

“No one got paid, but we were working hard while also having a really good time. By ’87 it had ramped up; it was more like going to work as professional athletes; people were hired and fired for their performances.”

Gahagan said no one on KZ-3 is paid, although all are veteran sailors, including locals Duncan Skinner and Chris Fischer, who have America’s Cup credentials as well.

“The team has sailed together now for five years and feels good about knowing the boat,” he said, adding that local knowledge, which afterguard member, Brad Read, and other area sailors contribute, also is a plus.

“We haven’t had many other Grand Prix 12 Metres to sail against, and it’s time to mix it up with some of the good competition coming in,” Gahagan said.

“The others won’t know the boats as well, perhaps, but they’ll pick it up in a hurry,” said Gahagan, referencing the fact that some of the teams have only recently formulated, specifically for competing at the 2019 Worlds and the Pre-Worlds, also to be held in Newport (July 6-7).

As for 1983, when the world watched as John Bertrand’s Australia II (KA-5) beat Dennis Conners’ Liberty (US-40) and afterward revealed its secret weapon winged-keel to thousands of race fans on the Newport waterfront, Gahagan said he was watching, too, from a TV in Vermont.

“I wasn’t there for that one, but I’ve been all over the world sailing, and having all the boats on Thames Street the way it was, how close we all were…it can’t be replicated,” said Gahagan.

“Newport to me is a special place…it’s why I still sail with Gunther and his team; it’s where the Cup should be if America can win it back next time.”

Mike Toppa (USA) will sail on the newly confirmed Modern Division entry Enterprise (US-27), chartered from the U.S. Merchant Marine Academy (USMMA) Sailing Foundation by Clay and Nancy Deutsch (Newport, R.I.). He sailed on the same boat in 1980 when she served as a Trial Horse for Dennis Conners’ successful Freedom campaign.

Enterprise was discovered in France, in disrepair, a few years back, and brought back to racing form by two different owners before she was donated to the Foundation.

“A lot of design work has been done, and everything has been changed, including the deck hydraulics, mast, keel, trim tab and sail plan.”

The best things about the old Newport Cup days for Toppa was learning as much as he did, sailing with the best sailors at the time, and soaking it all up. “I mean, I was sailing for the America’s Cup in my hometown; it was the biggest sailing regatta in the world.”