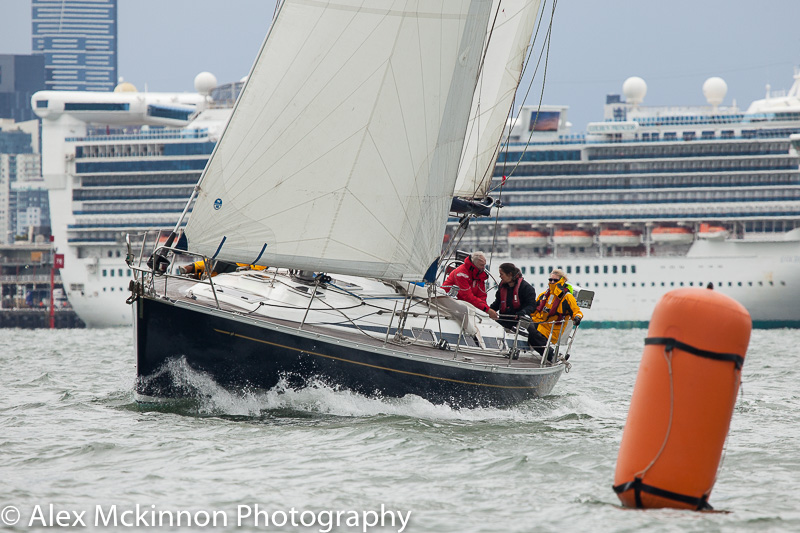 The Royal Yacht Club of Victoria (RYCV) played host to the Race Day 1 of the Port Phillip Women’s Championship Series (PPWCS), yesterday, Sunday 19th February, 2016. The Val Hodge Trophy is named after one of RYCV’s earliest female boat owners, Val Hodge, who joined the club in 1985 with her husband, Arthur. As time progressed Arthur was unable to spend the time skippering their boat so Val secured her place in history as the first lady skipper at RYCV.

Yesterday’s race saw nine boats hit the start line in unseasonal weather. The rain and gusty morning weather seemed to change a few of the fifteen entered boats minds but those who stuck through the squalls were able to enjoy flat water and mildly breezy conditions by race time.

The race was conducted at the northern end of Port Phillip Bay and was directed by sole Race Officer, David LeRoy. Competitors were required to conduct a three lap windward- leeward course. As it was the first day of racing for the crews many used the race to 'iron- out some of the creases'. Strategy was the aim of the day’s racing; a split in the fleet at the start saw those who used the left to get back gain an advantage and those who had the practiced skill set to sail with a kite on the downwind were able to create a reasonable lead.

Winner of the 2016 PPWCS Perpetual Trophy in AMS, IRC & PHS, Monica Jones and her crew on ‘Salamander III’ took charge from the start. Following a strong upwind they were able to round the top mark first and extended this lead with a fast and controlled downwind taking the win in AMS, IRC and PHS. Monica said,

“I really try to get different and new women from other clubs around the bay to sail with me. Yesterday we had a lady from Safety Beach Sailing Club and another from Warrnambool. Our aim while racing was to try and get a good start, stay in clear air and not get caught amongst the pack. I think we did this quite well yesterday!”

Similarly placed was RYCV local skipper, Cath Beaufort on ‘Up 'N Go’, who placed an impressive 3rd in AMS, 2nd in IRC and 2nd in PHS. Cath recapped the race yesterday,

“Yesterday was unexpectedly enjoyable! As we were getting rigged for racing a large squall came through and we thought the rest of the afternoon would be like this but once we got out there the skies cleared and it was actually quite pleasant – we’re glad we went out for the race.

“Generally, we had a good race with our downwinds being quite strong. We had some new crew and some of our regulars on board so the learning curve for everyone was quite steep yesterday. We hope to do all the other races as the PPWCS is a great lead up to the Australian Women’s Keelboat Regatta (AWKR) in June.”

The Val Hodge Trophy is the first of five race days included in the Port Phillip Women’s Championship Series (PPWCS). The next race is the Women in Sailing Challenge hosted by Sandringham Yacht Club next Sunday, 26th February 2017. For a list of all the regattas and where to register for them click here.

For more information and to register visit the Women and Girls in Sailing website. For all results of the Val Hodge Trophy click here.