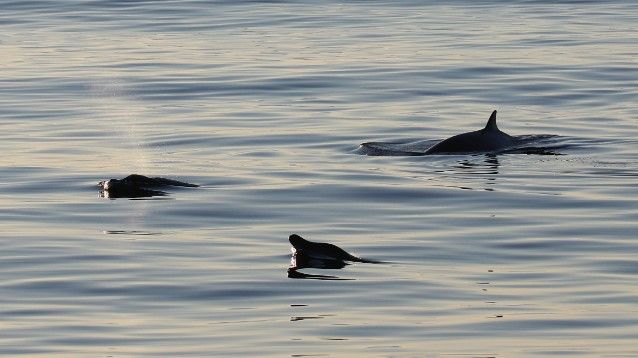 NAVSEA funded the expedition to determine the source of a unique beaked whale vocalization near a Navy test area in Southern California thought to have come from a Perrin’s beaked whale. Researchers from the U.S. Navy and Mexico’s National Commission of Natural Protected Areas collaborated with other U.S. scientific organizations in an attempt to document the animal responsible for making the distinctive noise. Instead, the researchers encountered three animals that do not look or sound like any known beaked whale species.

“This expedition set out to link a known vocalization to a species of beaked whale that was previously described from stranded animals in southern California. Instead, we may have discovered an entirely new species of beaked whale with a new type of vocalization, which is astonishing,” said Dr. Elizabeth Henderson, a marine researcher from the Naval Information Warfare Center (NIWC) Pacific.

“NAVSEA is committed to supporting our Sailors while also protecting our natural environment,” said Monitoring Program Manager Benjamin Colbert. “To ensure we maintain the public’s trusts and to be conscientious stewards of the environment, we are committed to increasing our knowledge of the marine ecosystem so we can minimize our impact on marine life and comply with all applicable federal laws. I am proud the NAVSEA monitoring program could fund this research that helps us better understand the oceans and am excited to see what’s next!”

Neither the physical nor acoustic characteristics of the three observed whales match photographs or published descriptions of known species. Although the vocalization is similar to the call assumed to be made by Perrin’s beaked whale known as BW43, it does appear to be distinct. The researchers collected eDNA water samples that will be evaluated at a genetics lab to confirm this is a new species.

“This exciting discovery improves the Navy’s ability to monitor the impacts of Navy testing on the marine environment while also demonstrating our continued stewardship of these waters,” said Colbert.

This article appears courtesy U.S. Navy News and may be found in its original form here.