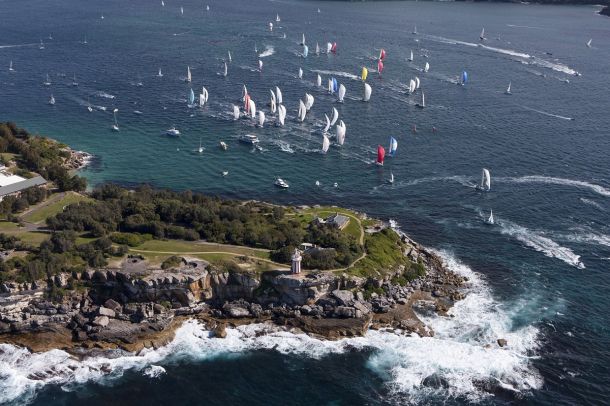 CYCA Sailing Manager Justine Kirkjian said online entry and Notice of Race are available now and she expects up to 60 boats will take part. She added: “We will be requiring all boats to have an AIS transponder. From July 1 it becomes mandatory for Category 1 races, but the CYCA is making it mandatory for Category 2 as well.

“Competitors should also be aware of another change in the YA Special Regulations which requires all EPIRBS and PLB’s so be GPS capable from July 1.”

CYCA Commodore, John Cameron commented: “Summer sailing has drawn to a close, so we start to think about the Land Rover Sydney Gold Coast Yacht Race. The race is in its 30th edition and historically attracts some of the high flyers in the lead up the Rolex Sydney Hobart Yacht Race, which brands this race a must-do experience.

Matthew Wiesner, Managing Director, Jaguar Land Rover Australia said: “Land Rover Australia is delighted to be the naming rights sponsor of the Sydney Gold Coast Yacht Race, particularly as the 2015 race represents the 30-year milestone of this significant blue water ocean classic, and Land Rover Australia’s second year as sponsor.  We are looking forward to some spectacular action on the water with the stunning Gold Coast as the iconic finishing back drop.”

“The opportunity to turn left at Sydney Heads makes the race something special, as does the warm welcome received by the Southport Yacht Club on arrival. And we’re looking forward to welcoming the team of three that will represent our Queensland finisher,” he said.

Sam Haynes won the race last year with his Rogers 46, Celestial, and ultimately won the tightest battle to be named Blue Water Pointscore champion. He will be on the start line again; this time with a TP52 renamed Celestial.

“It’s a bit more boat to handle, but we’re up for the challenge” Haynes said of the former Fomo. “We’re especially looking forward to racing against Balance (Paul Clitheroe) and the others in our size range,” finished the Sydney vet who will take the CYCA’s Land Rover Winter Series as an opportunity to limber up.

It was Balance (also a TP52) that Haynes and his Rogers 46 beat to the punch for BWPS victory and along with Tony Kirby’s third placegetter, Patrice, Clitheroe’s boat is expected to race. Kirby’s Ker 46 is in stunning form too, having taken out the Sydney Harbour Regatta in March and dominating at Airlie Beach Race Week to win the IRC title last August.

Yachting Australia President Matt Allen also intends racing. The question is, with which boat? He recently purchased the TP52 Shogun V. Rob Hanna’s boat was cleaning up in last season’s BWPS until the Rolex Sydney Hobart, which it did not contest. Allen also owns the near-new Carkeek 60, Ichi Ban.

A hard decision will have to be made soon. The temptation will be strong to take the TP52 for the same design competition he will get. But Shogun V was designed for European regattas and is not stiff enough to take to Hobart as she is and Allen, like others, has his sights set on winning the BWPS.

Either way, Allen, a past CYCA Commodore says, “I am absolutely looking forward to the race. It’s the 30th running and the first race of the Blue Water Pointscore. It’s the most exciting race on the calendar – apart from the one that starts at 1pm on Boxing Day,” he said laughing. “It’s a great lead-in to Airlie Beach and Hamilton Island, where the IRC Australian Championship will be held this year.”

Established in 1986, the annual race attracts some of Australia's most prominent yachts. Unusually, neither record holder, Wild Oats XI (Bob Oatley), or Ragamuffin (Syd Fischer), are able to make the race, as both will be racing overseas.

However, Mark Bradford has signalled Black Jack’s (Peter Harburg’s V70) intention to compete, “It’s a race we always look forward to,” Black Jack’s Queensland based skipper said. It is also likely Anthony Bell’s 100 foot Perpetual Loyal will be a starter.

“Southport Yacht Club is excited about this year’s Land Rover Sydney Gold Coast Yacht Race, this year being the 30th. We’re looking to at least three yachts sailing as the SYC team. Among our young members are Olympic and world champions who, moving into ocean racing, are excited that this can be their first step,” SYC Commodore Phil Short commented.

“Our members, skippers and crews always enjoy visiting and competing with the CYCA, and in return, we offer reciprocal camaraderie to all on arrival. We offer visitors a warm welcome and have plenty on offer when they arrive. To our staff and members, this event is what the Rolex Sydney Hobart is to Tasmania,” he ended.

At 1300 hours on July 25, the fleet contesting the race will line up at the Nielsen Park start line on Sydney Harbour before turning north at the Heads bound for the Main Beach, Southport, finish line. Along the way the yachts will pass landmarks such as Newcastle, Port Stephens, Port Macquarie, Coffs Harbour and Cape Byron.