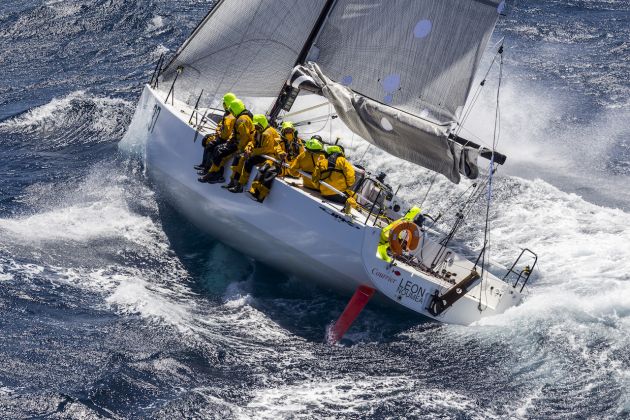 A snap decision made two months prior to the Rolex Sydney Hobart Yacht Race has resulted in a brilliant second place overall and Division 4 win for Gery Trentesaux and his crew, four months after the Frenchman won the Rolex Fastnet Race in England with Courrier du Leon.

And nobody could be more surprised to find himself in second place than Trentesaux, who has been in the race previously; in 1994 on the Beneteau Kyote and then in 2008 with Lady Courrier, when he finished 37th overall.

He may not be a household name here, but the yachtsman has been around a long time, leading a French team to victory in the 2006 Commodores’ Cup and competing in France’s winning Corum team at Admirals’ Cup in 1991. He also raced single handed in the 2006 Route du Rhum and is an avid competitor in one-design classes, racing his J/80 regularly.

For the Cruising Yacht Club’s 628 nautical mile race, Trentesaux brought with him the sistership to Courrier du Leon. “It is a Valer/JPK 10.80 and it sailed a lot of miles to New Caledonia and only arrived in Sydney one week before the race. My crew arrived just five days before, but they are a very good crew,” he said.

Knowing conditions would be tough, Trentesaux bought a whole new sail wardrobe for the yacht, including a heavy maxi spinnaker.

“We did this because I broke all the sails with the Beneteau 45 in the 2008 race,” he says. “I also told the builder we had to do this race.”

Such are his results, Trentesaux has a partnership with Beneteau to sail various yachts.

“They asked what it would take to psych me up to race. I said, ‘the Rolex Sydney Hobart’, so here we are, with Michel Quintin, who used to own Lady Courrier.”

Comparing the three races, Trentesaux said 1994 was “quite difficult, especially in Bass Strait, the waves were quite something. This one was hard at the beginning. Second place at the end, is very exciting for us.”

At the time of writing, 76 of the 77 yachts left racing had crossed the finish line in Hobart. A loud roar when up for the Chinese boat, Shuguang Haiyang, owned by Roy Pan and skippered by Dong Qing. Pan pledged, “We will be back, with a bigger, faster boat. I have experienced nothing like this before, we will be back next year.”

Geoff Nixon’s Myuna III remains at sea, the 24 year-old Cavalier 37 is due into Hobart at approximately 2.53am on New Year’s Day. Her crew is sure to get a rousing welcome into Hobart, reserved for the last boat home. The Tasmanians know how to celebrate every special moment of this race, so nobody misses out.