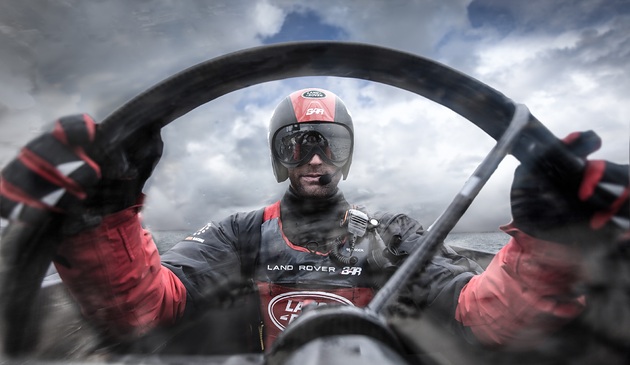 Imagine running in a storm. The wind is blowing over 50mph, and the rain is driving sideways into your face. Now imagine trying to tell someone fifteen feet away that there's a hurricane coming and they need to get off the street. It's only going to happen if you run right over to them and yell in their ear.

But these are the conditions that the Land Rover BAR sailing team have to operate in when they are racing; sailing at speeds up to 50mph, kicking up a ball of spray that can mean living in a permanent vertical deluge. This is not the ideal environment for communicating in a high pressure, time intense situation, so a solution for improving communications on board was required.

The sailing team member tasked with finding a solution to this problem for his crewmates is bowman, Matt Cornwell. He's been racing in the America's Cup since 2003, and has seen the problem of onboard communication simultaneously get more difficult to solve, and escalate in importance.

“It's something that we have now identified as a real performance differentiator,” said Cornwell. “It's vital to get the comms right, we have certainly had to step up the game from the pre-2010 era when it was nice to have it, but it wasn't absolutely essential — and you could get the job done with some fairly basic kit. Now we are having to get much more sophisticated.

Cornwell had one technology in particular that he was interested in, and he enlisted the Technical Innovation Group (TIG), powered by PA Consulting, and Project Manager, George Sykes to see if the team had any partners who could help.

It so happened that the BAE Systems Applied Intelligence Laboratories were world leaders in bone conduction technology. The technology, which uses the body's natural ability to transmit sound through bone conduction, provided a potential solution as a way of dramatically improving communication between the crew on-board and the support boats. 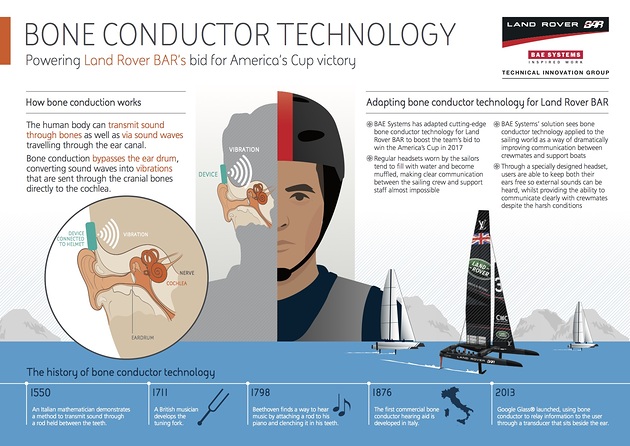 Mohammed-Asif Akhmad explained, “Bone conduction involves a surface transducer creating physical vibrations from an audio signal. The transducer must be touching the head of the user to conduct vibrations directly to the inner ear. The inner ear then translates these vibrations into nerve impulse signals sent to the brain, allowing the user to hear audible sound.”

The first challenge was to get the radio right, there were several requirements from being the right frequency, to being robust and marinised for the on water environment, as well as having enough range, so the support boats can talk to the race crew — that means over a couple of hundred metres.

The next challenge, the microphone. As Akhmad explained, “The main challenge for bodyworn headset microphones in harsh marine environments is having to deal with loud background noise, as it can affect the clarity of the speech being transmitted. Similarly, they need to be rugged to operate in extreme conditions whilst still being comfortable and ergonomic for the user.”

And then there are the headsets….

“The headsets fill with water and it doesn't take a lot of water in a microphone before the sound gets very muffled. And the same with the ear pieces, they fill with water and die pretty quickly when they get wet with salt water every day. We also need some sort of noise cancellation. It's not just all the noise that is coming from the boat – wind noise, the whistle from the foils, I think a lot of people will be surprised how loud that is – but people also raise their voices sometimes, and a lot of comms systems don't deal with that very well.”

If that wasn't all hard enough, there are other issues. “And you also need clear communication outside the headset, since you still need to have a conversation with the guy who is stood right next to you. Not all the crew will be talking on the comms all the time. So now we need solutions that take the speakers out of your ear.”

Daniel Black confirmed the advantages of the new system, “The fact that both ears are free and open means that external sounds can be heard and positioned – this is key when sailing as you need to not only hear what is happening around you but also to know the direction that the external sounds are coming from; something that's impossible with traditional headsets.”

“The team have been testing the raw technology and are very happy with their progress. Once they have settled on the microphone and speaker specification, they will look at customising its installation into the helmet. “We're definitely going in the right direction,” concluded Cornwell, “I'm very happy that we're going to have a great solution this time around.”

“They deal with the military market and there are a lot of parallels with a similar environment to ours,” said Cornwell. “They need their kit to be waterproof and very robust, and with a certain level of simplicity. They also need noise cancelling; their environment is louder than ours, and of course the kit needs to be really robust too. BAE have been looking at those solutions for the military market and we were able to tap right into that.”

Experience the sounds onboard here