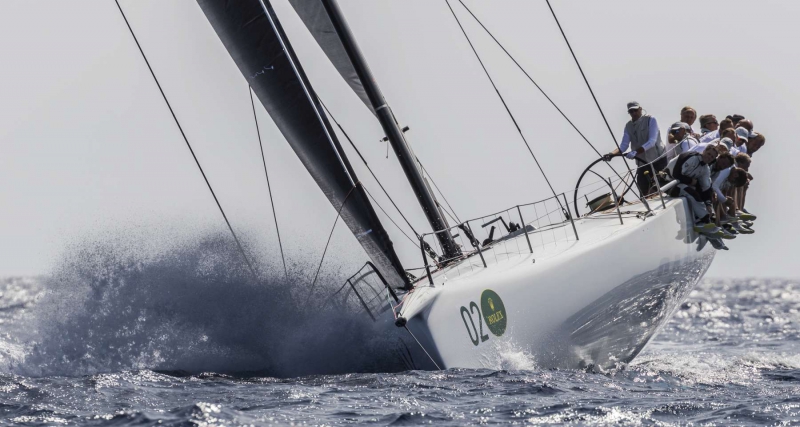 Today was scheduled to be lay day for all Classes, but the Race Committee reserved the right to use it as recovery day in case of need. Since the Wally and Maxi72 Classes couldn't race Tuesday due to lack of wind, they made up the lost day today.

The Race Committee got starting procedures underway punctually at 11:30 in westerly breezes at 18 knots. By the time the fleet had reached the upwind mark, these had built to 20 with gusts at up to 25.

For the third time in a row Momo dominated the Maxi 72 Class. This yacht has Marcus Wieser as tactician, and the Kiwi and six-time AC competitor Murray Jones as strategist. Caol Ila R was in the lead at the first upwind mark, but broke her enormous gennaker on the run. That left the course clear for Momo, followed by Cannonball and Proteus. Bella Mente had a problem with their jib on the upwind leg and dropped back, even though they managed to recover a few positions later.

Murray Jones, strategist on Momo, had these words: “We had a great race today. It was a little more difficult than normal, the breeze was shifting right to left and so it made it a really tricky race course with a lot of changes. Overall, we're very happy so far. I've probably been to Porto Cervo six times and every time I love it.”

The Wallycento Galateia dominated the Wally Class once again and has lengthened her lead on Nahita, fifth today, and Lyra, who placed second. These two Wally 80s are separated by just one point in the overall standings. The results in corrected time tell the story in numbers, but the sheer beauty of these racers/cruisers in action in 20 knots of breeze, racing against the backdrop of Sardinia's ruggedly beautiful landscape has to be seen to be believed. The Wallys started just after the Maxi72s and had stronger breezes, especially on the final run where gusts hit 25 knots.

David M. Leuschen, Galateia's owner, had these words: “I am very nervous about the starts because I have had way less sailing experience than the other owners. We have been starting much further up the line trying to keep away from other boats and that end of the line has tended to work quite well for us. All in all it has been a very good regatta for us but there are two more days left to go!”

For safety's sake, Principal Race Officer Peter Craig sent the boats back to port after the first race when winds reached 28 knots. Preparations are well underway for the big Crew Party that will be held tonight in piazza Azzurra, in front YCCS Clubhouse.

All classes are scheduled to compete in a coastal race tomorrow starting at 11:30 AM. Winds are predicted to be light and unstable.