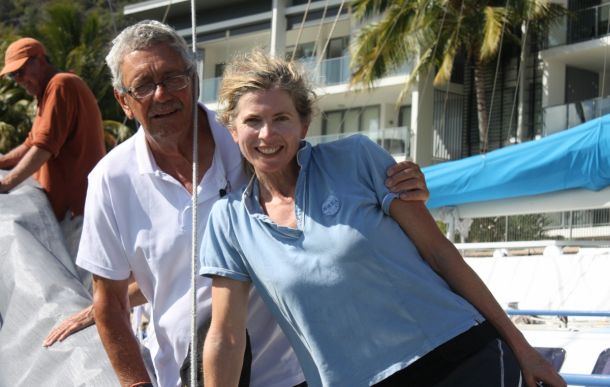 Setting the racing scene for the coming five days was Townsville-based navigator Will Oxley, who has just returned from competing on Ichi Ban in the IRC Australian Championship and before that on Team Alvimedica in the Volvo Ocean Race. He briefed the competitors on a forecast which has all the hallmarks of delivering very soft conditions.  “It’s going to be pretty light,” Oxley declared at the Briefing.

“The low down south that has been bringing all that bad weather to NSW has blocked the high pressure. So, there is a big high sitting over New Zealand and we have a light easterly flow. Pretty much, it is going to be soft for the week. The breeze will go left all day.”

As the briefing came to an end the crowd started to dissect the news with some sailors willing to offer up contrary statements on the forecast. Those light air specialists in among the throng were quietly smiling at the news.

Performance division’s Peter Sorensen was just happy to be back at Magnetic with his crew of men and women, including his daughter-in-law, Jenny Sorensen. She has been given leave of absence from her husband and her two teenage daughters to race on The Philosopher’s Club. The experienced Tasar class sailor, who hopes to return to Townsville in late September for the Tasar Australian Championship, will be on the mast.

“I have sailed with Peter a couple of times, but not in any race situation apart from a Wednesday afternoon which is really more social. When I got the invitation to race, I jumped at the chance,” Jenny said.

Also in Performance division is the New Zealand team of Peter Hall and his Richmond Yacht Club mates. They have borrowed the 40-foot monohull Komodo to compete in their first Magnetic Island regatta. Antill Marine and Komodo crew member Jason Antill has joined the team bringing with him a solid knowledge of the race area having competed in the event several times.

“I organise these trips for my company Yachting Events,” Hall said. “We have done Airlie Beach for about 12 years. This is our first time here.” At other events Hall has mostly borrowed cruising-type boats. The Farr 40 is certainly a step up for his team. “We are really looking forward to this and being in the combined fleet. It will be good competition,” Hall said.

Earlier today Thompson announced that the divisions for this year’s regatta had been modified to maximise the competition. “Because we don’t have big numbers in IRC or PHS, we have combined the two divisions. They will have the same program, but the IRC boats will get two scores; an IRC score plus a PHS score.

“The same thing has happened with the multihulls. We have had two or three boats pull out so rather than have two small divisions, we have made one more substantial division and they will be scored under a performance handicap. That will be based on the OMR, but they will change every day.”

The Cruising Spinnaker divisions have again made up the majority of the fleet. They have been split into two groups.

The last entry received came in just as today’s registration started. Cruising Spinnaker division’s Gill Shannon and Wayne Frankcombe left Melbourne in late July on their 38-foot yacht K-Yacht-Ic with the sole goal of making it to Magnetic Island in time for the regatta. They only just made it.

“We did this regatta a couple of years ago on a boat called Dream and we had such a good time we thought we should get our boat up there,” Frankcome said.

Racing for the national fleet in the five-day regatta starts tomorrow at 11am with the fleet schedule to battle it out in the Strand Bay Race.