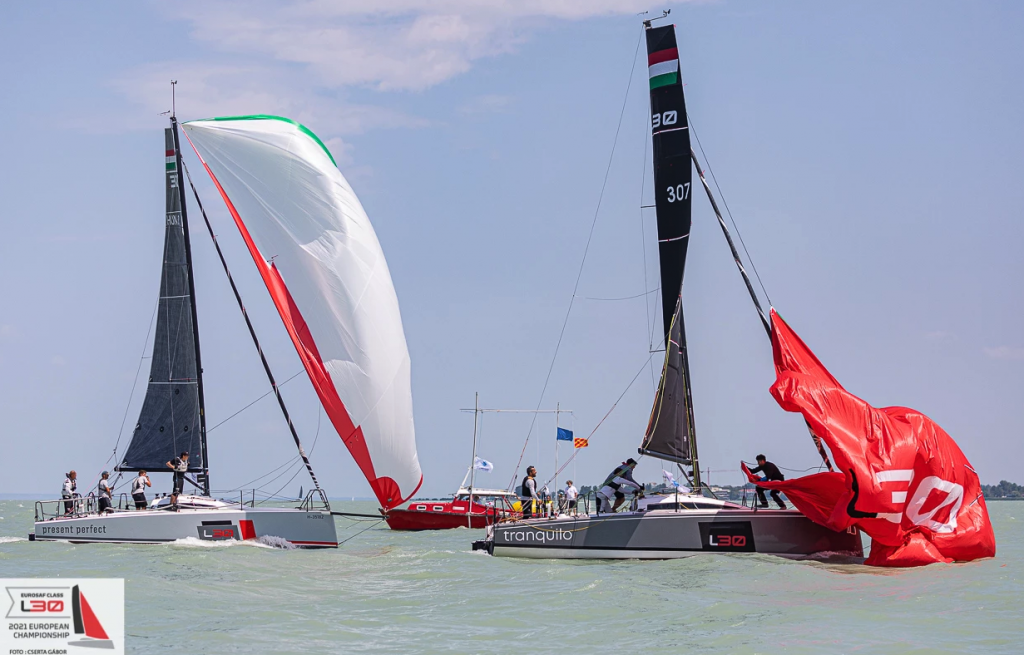 HUN307 Tranquilo come away with the win on the final day of racing at the 2021 EUROSAF L30 European Championship. Photo - Cserta Gábor. 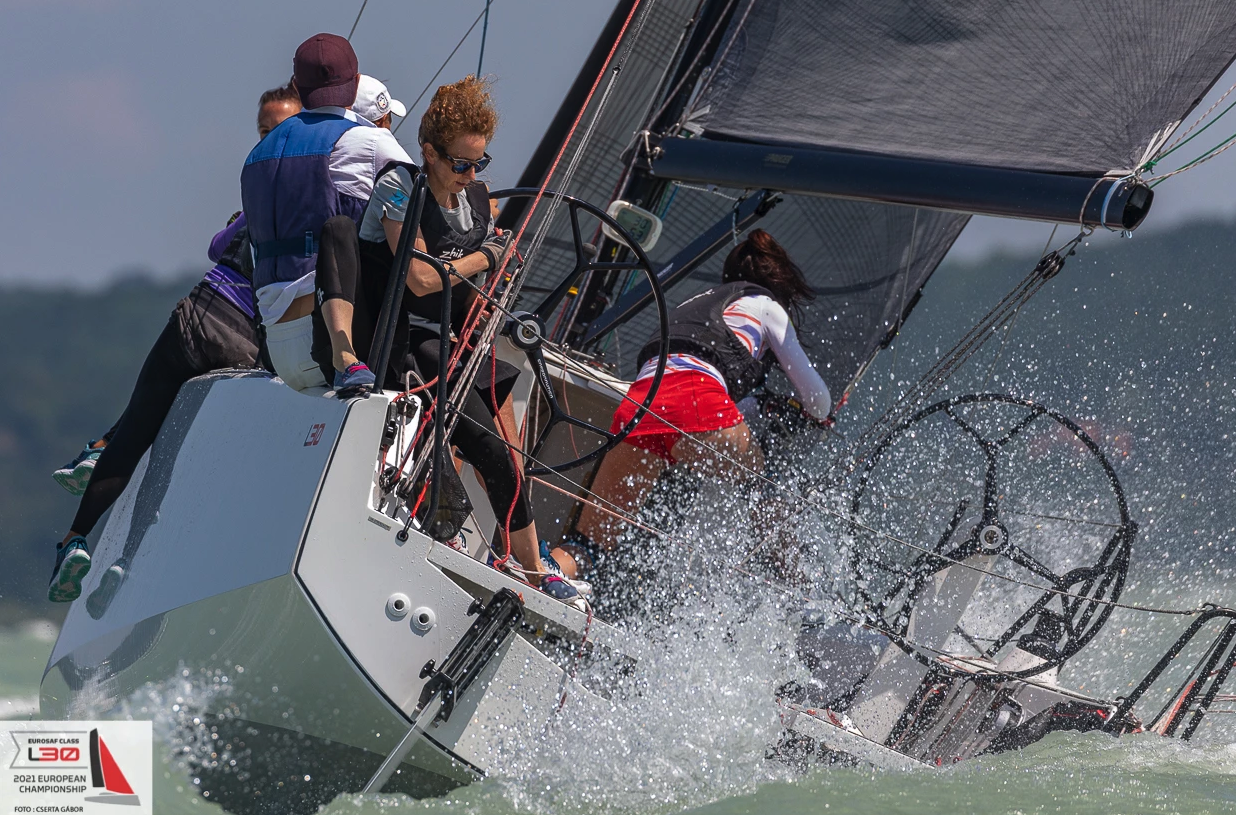 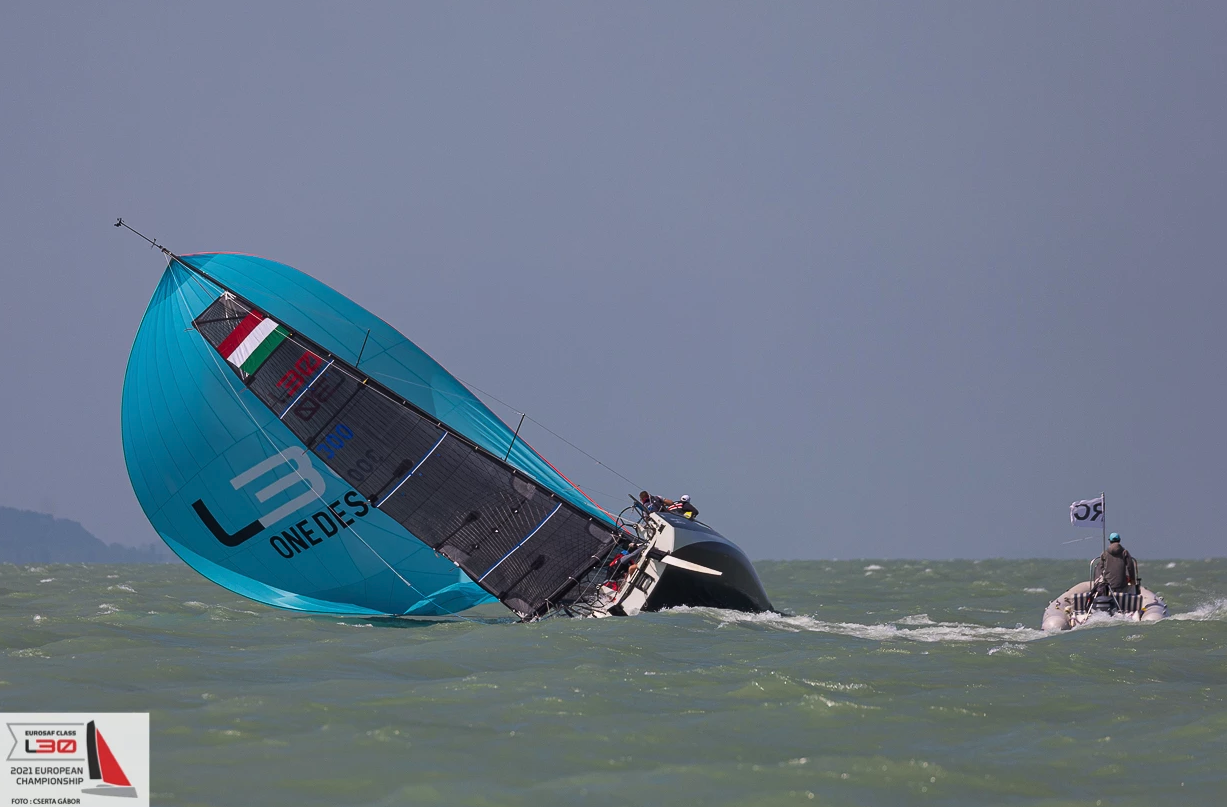 Spectator sport at its best on the final day of racing at the EUROSAF L30 European Championship. Photo - Cserta Gábor. 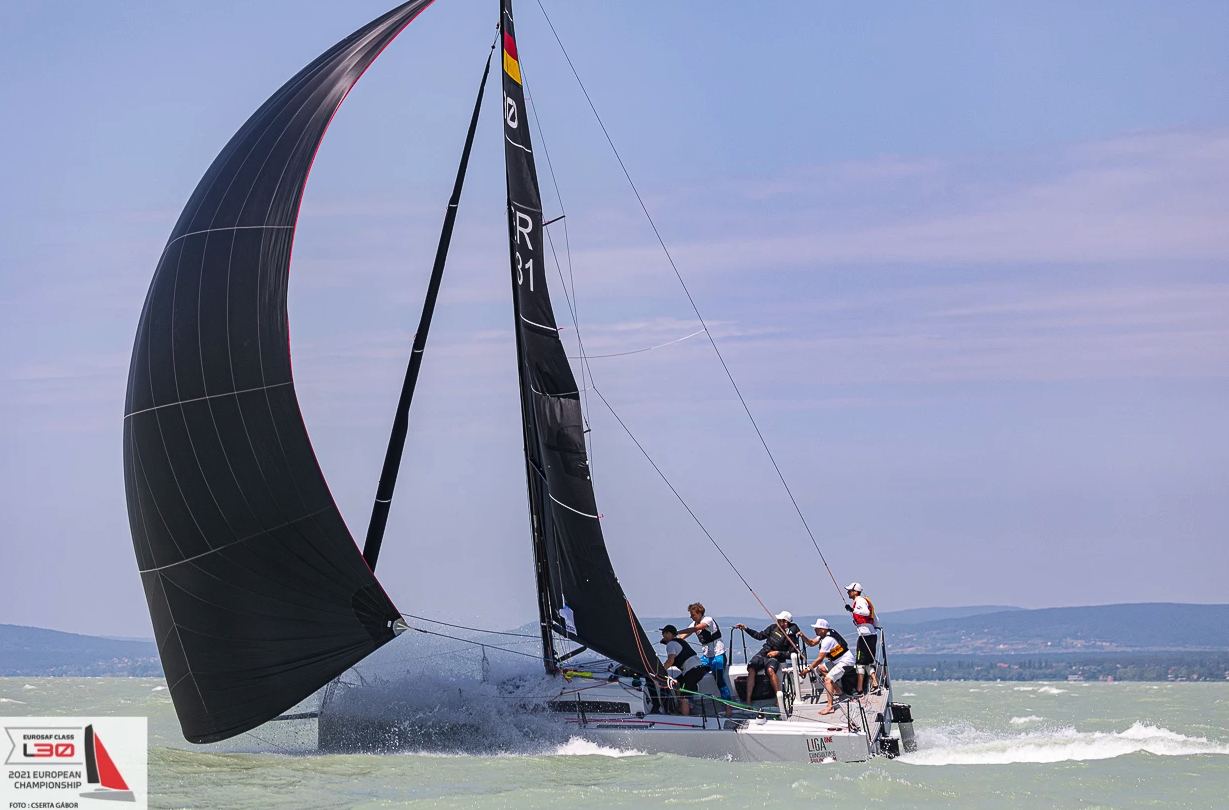 Some yachts reached boats speeds of up to 20 knots on the final day of racing at the EUROSAF L30 European Championship. Photo - Cserta Gábor.

Balaton Lake, Hungary: At least four teams were in the running to win the 2021 EUROSAF L30 European Championship, but local sailors HUN307 Tranquilo came out on top after winning two out of three races on the final day of the Championship.

The weather was fantastic with sunshine and fresh northerlies of 15 to 20 knots making great racing for the 14-strong fleet. In such conditions the crews received a chance to explore the full potential of the L30 Class, reaching downwind speeds of up to 20 knots.

With a DSQ discarded on the day before, the team of Attilo Bakonyui lost a possibility to win with a race to spare. That was good news for the HUN308 Present Perfect Team, Klaus Wagner’s GER31 and Ilya Kogan’s ISR15 crews. The UKR12 Tardex joined the medal hunt after posting a second and fifth ahead of the final race.

The final race turned into several personal duels and everybody was chasing the prospect winners, seeing HUN307 Tranquilo’s score a ninth in the last race. Luckily, for the HUN307, even that didn’t threaten their overall victory.

A well-deserved bottle of champagne was already waiting at the pier for Attilo Bakonyui’s Hungarian team, as they arrived onshore.

“We are very happy to win the European L30 Class trophy”, Bakonyi commented. “We were improving every day, but the last day was tough. We experienced pressure from other teams and luckily we maintained our lead.”

Tenke commented, “Really this event was up and down for us but also as a member of the hosting club I am proud that Balaton did not disappoint the sailors. In three days we had different conditions, we started with light winds that was getting stronger each other day. This is fantastic opportunity for all the crews to adjust their settings and polish their performance. As a result, the fleet was tight at each mark, so everybody had a chance to improve.”

“We are more than happy to win a medal at this Championship. We are new to the class and we are still learning the boat,” Wagner commented. “Obviously we made big progress these days and today our downwind speed was incredible. We were penalised in the second race’s start and still were able to recover and finish fourth in this race, mainly due to our great downwind sailing.”

As the L30 European Championship was held under auspices of EUROSAF, the organization’s Secretary General Doris Gstatter attended the event. “We are delighted with the level of organization of the event,” Gstatter said. “The racing was fantastic. The L30 class can really serve to promote sailing around Europe, as she is multifunctional. You can sail with family or race competitively – L30 is perfect for both.”