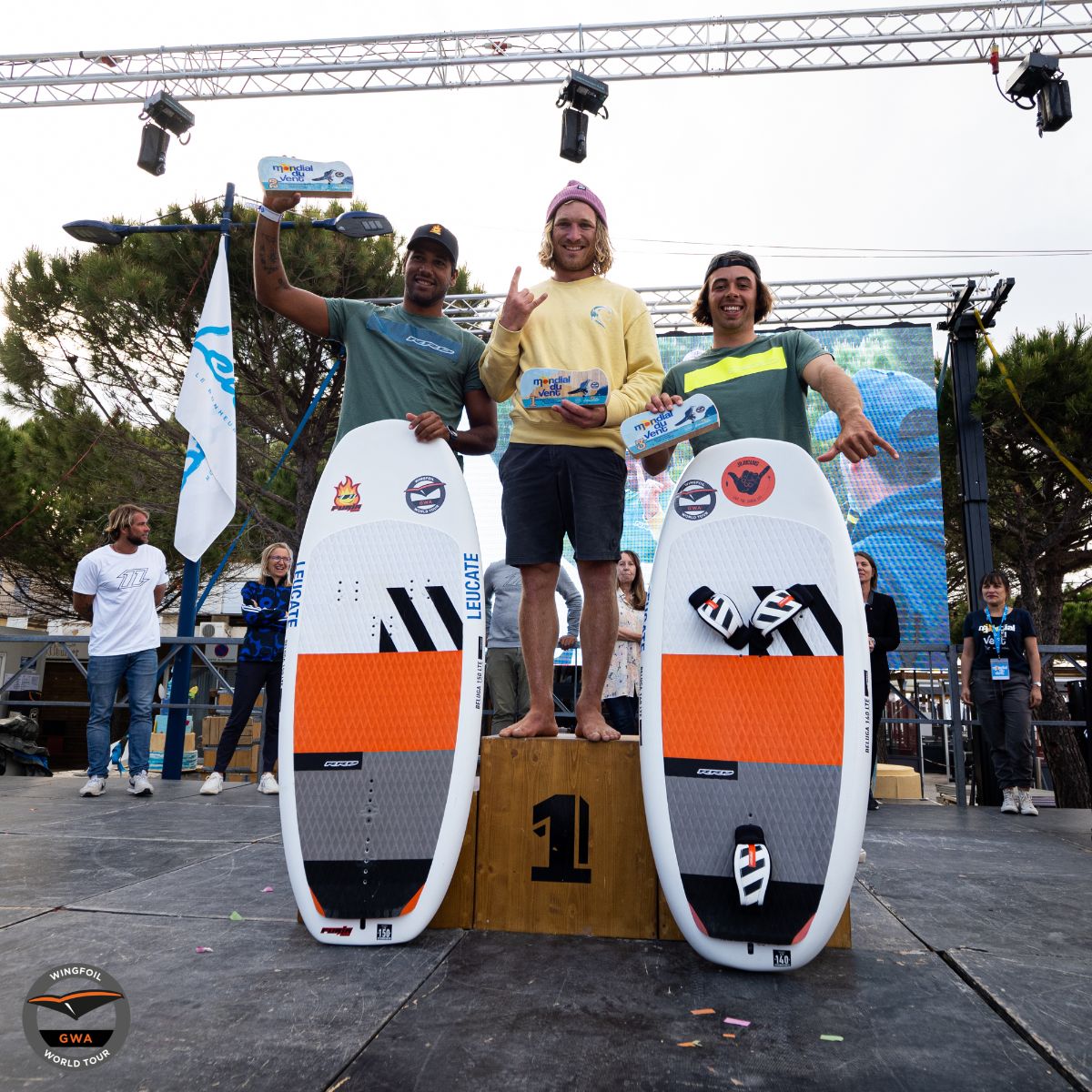 Leucate, France: We finally arrived at the sixth and final day of competition at the GWA Wingfoil World Cup France on Sunday.

The event had started slowly back on Tuesday with a few light, no-action days, but since the Tramontana wind kicked-in at dawn on Friday the action has been non-stop throughout the weekend.

The competition resumed mid-Sunday morning with four heats left to complete in round four, which catapulted rapidly by as the Tramontana winds continued to build.

Windsurfing, kitesurfing and now wingfoiling pro, Francesco Cappuzzo from Italy, had his game face on Sunday, knocking out the vastly experienced freestyle, kiteboarding competitor, Stefan Spiessberger in round four. Cappuzzo eventually came off second best in the semi-final in a very close battle with RRD teammate, Golito Estredo, who would go on to the final to meet Balz Muller; the two having met many times before in freestyle windsurfing, with the Venezuelan having won each and every one of those battles.

A mouth-watering match-up took to the water in round four when new kid on the block, 16-year-old Christopher Macdonald (USA) put on an incredible display of committed, powerful wingfoiling to successfully overcome F-One teammate, and reigning World Champion, Titouan Galea.

The two riders set out matching each other trick for trick, but Macdonald had his mission plan locked in and looked as fluid as he could ever have hoped for, nailing extra height and clean landings.

Sadly, for the teen, the American could not keep up his winning streak and was unfortunately knocked out in the quarter finals by Venezuelan Golito Estredo.

French rider Camille Bouyer has been incredibly impressive all event. As well as being locked in a super tight tussle with Titouan in the Surf-Slalom discipline, he despatched his countryman Malo Guenole here in the Surf-Freestyle, peaking his individual trick score with a massive 8.87 for a frontside seven – currently the big money move on tour.

Camille was humbled soon after by Balz in the semis who had overcome another emerging talent at this event, Gregorio Pugliesi in the quarters. However, the full extent of Muller’s mastery was yet to be revealed.

The grand finale of the GWA Wingfoil World Cup France saw two rivals from the world of professional freestyle windsurfing battle it out for the top spot on the podium.

Up to that moment, Müller, 28, had never managed to defeat the nine x Freestyle Windsurfing World Champion, Jose ‘Gollito’ Estredo Perez, 33 – a man much revered around the watersports industry for his unbelievable aerial ability and competitive drive that has been in effect for so long.

The athletic powerhouses stormed into the heat all guns blazing. Gollito threw a giant front loop to start things off and rode away cleanly. Balz answered back with a lofty backflip, tweaked to the max and, from then on, there was simply no stopping the Swiss rider who went into full beast mode.

“It was so much fun out there and that was the best heat of my life!” Balz exclaimed after the final. Landing almost everything he tried, despite the 30 – 40 knot gusts pushing him and his gear to their limits, he was rewarded by the judges with two huge scores for innovation. Pulling off a clew first backflip and a toe side backflip (the first time that anyone has ever landed them) he quite rightly ended up with devastatingly strong overall heat impression score of 9.33. In the end Balz amassed the event’s biggest heat score total of 42.27 points from a possible 50.

Müller, ‘Radiculo’, is one of this sport’s true pioneering innovators and, in truth, it’s quite a shock to consider how this is his first GWA Wingfoil World Tour event win. Well… he won the very first event the GWA ever staged in Tarifa three seasons ago. But Müller explained that he counts this win in Leucate as his “real” first win since things became more serious as a full world championship tour.

As we unpick the details from this event, the rankings may not entirely reveal a new world order of youth at the top of this sport – but they’re coming. Reigning Surf-Freestyle champion Titouan Galea knows he has a huge challenge to reclaim his crown this season, especially as Balz Müller may have just unlocked the secret of turning wizardry into wins.

Right after the completion of the Men’s Surf-Freestyle, the remaining Sunday focus shifted back to the Surf-Slalom heats as the race crew tried to slot in as many heats as possible.

After a full-on Friday of non-stop Surf-Slalom eliminations, the drama resumed on Sunday afternoon in the remaining event hours once Balz had climbed off the Surf-Freestyle beach podium. Both the men’s and women’s competition were delicately poised with ties for the lead, broken only by the slenderest of discards.

In the women’s, Nía Suardiaz clearly had a spring in her step after her maiden win in Saturday’s Surf-Freestyle. She won elimination round eight and nine, skipping her up the rankings, but not to the top. Flora Artzner, a marine biologist who has decided to put her career on hold, inspired by her wingfoil experiences, was determined to hold on to the slight lead she had over American Fiona Wylde from Friday. In the end proudly prevailed on home soil for her first event win.

In the men’s Camille Bouyer and Titouan Galea were similarly broken apart only by a small discard. Sadly, had their tantalisingly ultimate final elimination showdown battle was stolen when Bouyer was adjudged to have crossed the start line early and was disqualified.

In the end reigning World Champion Galea fewy round the markers on rails with an ever-increasing lead that only diminished once he let off the gas towards the end. Final Surf-Slalom results:

By Holly Keenan and Jim Gaunt