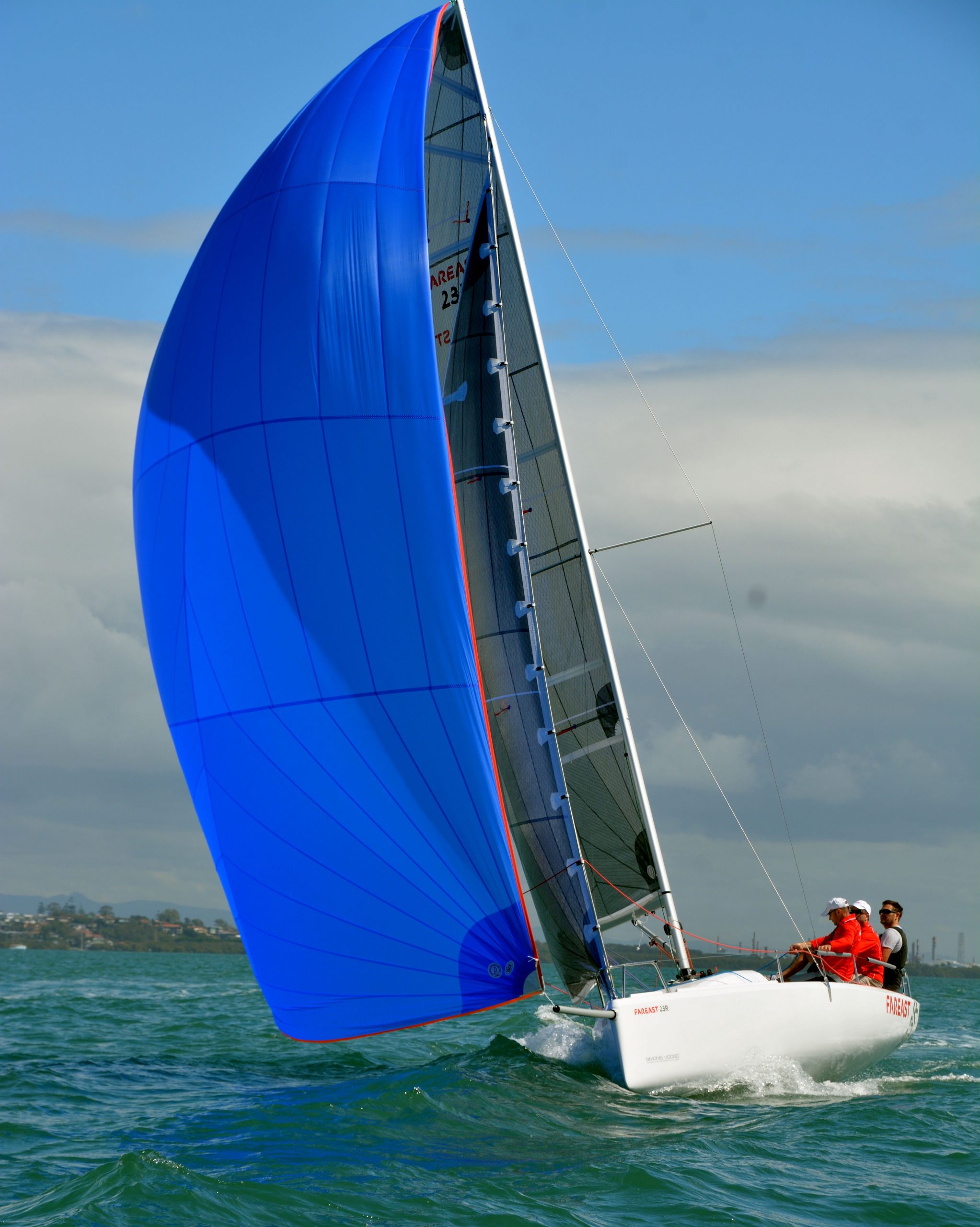 I was impressed with the Far East 28R when we tested it for the 2015 December/January issue of this magazine, so I had high hopes for her little sister, the new 23R. I was not disappointed.

Far East Yachts aim their small monohulls at the club racer market. They are well-built, fun to sail, economical to buy, perform well on handicap against bigger boats and inevitably will have a decent-sized one-design fleet operating in most countries.

At time of writing, more than 200 of the 28Rs have been delivered around the world and already there are seven in Australia. On the market for less than a year, that’s a very promising sign for one-design fans.

So far 85 of the 23Rs have been built, with most sold in China but with fleets also starting to emerge in Europe and North America.

The 23R is basically a cut-down version of the 28R, with the same modern hull shape, reverse bow, wide transom and simple but effective control line layout.

The hull is built using a polyester/foam-core sandwich which is vacuum infused, producing a light and rigid boat. The one-piece structural inner frame forms a stiff spine that distributes the keel, mast and rigging forces.

Although obviously mass-produced in China, I have always been impressed with the quality of the Far East boats and a close inspection of hull to deck joins, for example, reassures even the most sceptical of buyers.

The aluminium boom and rod kicker are from Selden, the two sheet winches are from Harken and the jammers are from Spinlock. The carbon main and jib are made from Contender sailcloth by Red Rum Sails in China, which is owned by Far East.

The square-topped main and non-overlapping jib deliver a total sail area of 32.7m2. There is one reefing point in the main which would reduce the sail area considerably but it is unlikely to be used except when cruising. The rig is well-balanced and can be carried easily in the 25 knot wind range that is likely to be the maximum these yachts would be sailed in during twilights or race weeks.

There are no running backstays to worry about during a gybe, with the mainsheet acting as the backstay.

We had ideal conditions for the test on Moreton Bay with the wind starting at 10 knots but building closer to 18 by the time we returned to the marina.

Going upwind the boat was very light on the tiller and speeds of around 7 knots were easily attainable. But the real fun started when we turned downwind and launched the 54m2 asymmetrical spinnaker off the retractable prodder.

As the kite filled, the bows lifted and the boat picked up speed instantly. We were immediately doing more than 14 knots and although the steering was sensitive, she was easy to keep on the plane. Reports suggest that in the right conditions, downwind speeds of close to 20 knots are possible.

The downwind run highlighted the only two changes we could suggest to Australian agent Gerrit Veenemans and they were minor ones.

Currently the boom vang control line is sheeted on the kicker, meaning a crew member has to go down to leeward to adjust it. It is needed to give the helmsman more control when planing and would be better if lines were led to both sides of the cockpit. The crew weight needs to be in the stern to get maximum downwind performance and it would be handy to be able to release the vang without moving.

The spinnaker halyard is cleated to the mast, again requiring a crew member to go forward when dropping the kite into the bag, which is placed in the companionway. Again, controls further aft would be advantageous.

These are very minor tweaks, however, and hopefully will be allowed when the one-design rules are written for the class.

Although more a small keelboat than a true sportsboat, the 23R will certainly hold its own against other trailerables of a similar size. It delivers the same high-speed downwind fun as a sportsboat, but is perhaps a bit drier.

The total weight of the boat is just 800kgs and 44% (or 352kgs) is in the keel, which is a bulb on a carbon fin that gives a draft of 1.4m when fully extended. Although she likes to lean over when going upwind, the stability is good and total wetted surface doesn’t change much.

Total towing weight on a purpose-built trailer will be around 1200kg, with the keel raised into the boat via a single lifting point.

Like the 28R, this is a boat that will appeal to the club racer. Easy to sail and well-rated, the Far East yachts are ideal for people who have been crewing on other boats but want to control their own destiny without spending a fortune. It will also appeal to owners of older designs such as the J24 who want to upgrade to a more modern and higher-performance craft.

The list price for the standard 23R is $52,500 and she can be raced with three or four people on board – no need to spend the whole day on the phone trying to secure six or seven big burly blokes for your next race week or the club’s twilights.

Interest has also been shown by several clubs that are looking for a couple of economical small keelboats for corporate match racing or adult learn-to-sail programs.

In the coming years I expect to see plenty of 23Rs and 28Rs at race weeks like the Sydney Harbour Regatta or Festival of Sails and, being trailerable, they will also make appearances at Airlie Beach Race Week and other events that caters for off-the-ramp classes.

There are also specialist events such as the annual trailer boat nationals, the Port Phillip Trailerable Series and the Bay to Bay in Queensland where these boats would be very competitive.

Gerrit Veenemans has two 23Rs in the country so a test sail is easily arranged on Moreton Bay. Far East also organise one-design regattas and the first one for the 23R had 28 entries, mainly from China.

For more information on the 23R or to organise a test sail, contact Gerrit Veenemans by phone on 0468 648 554 or check out the website at www.fareastyachts.com.au.