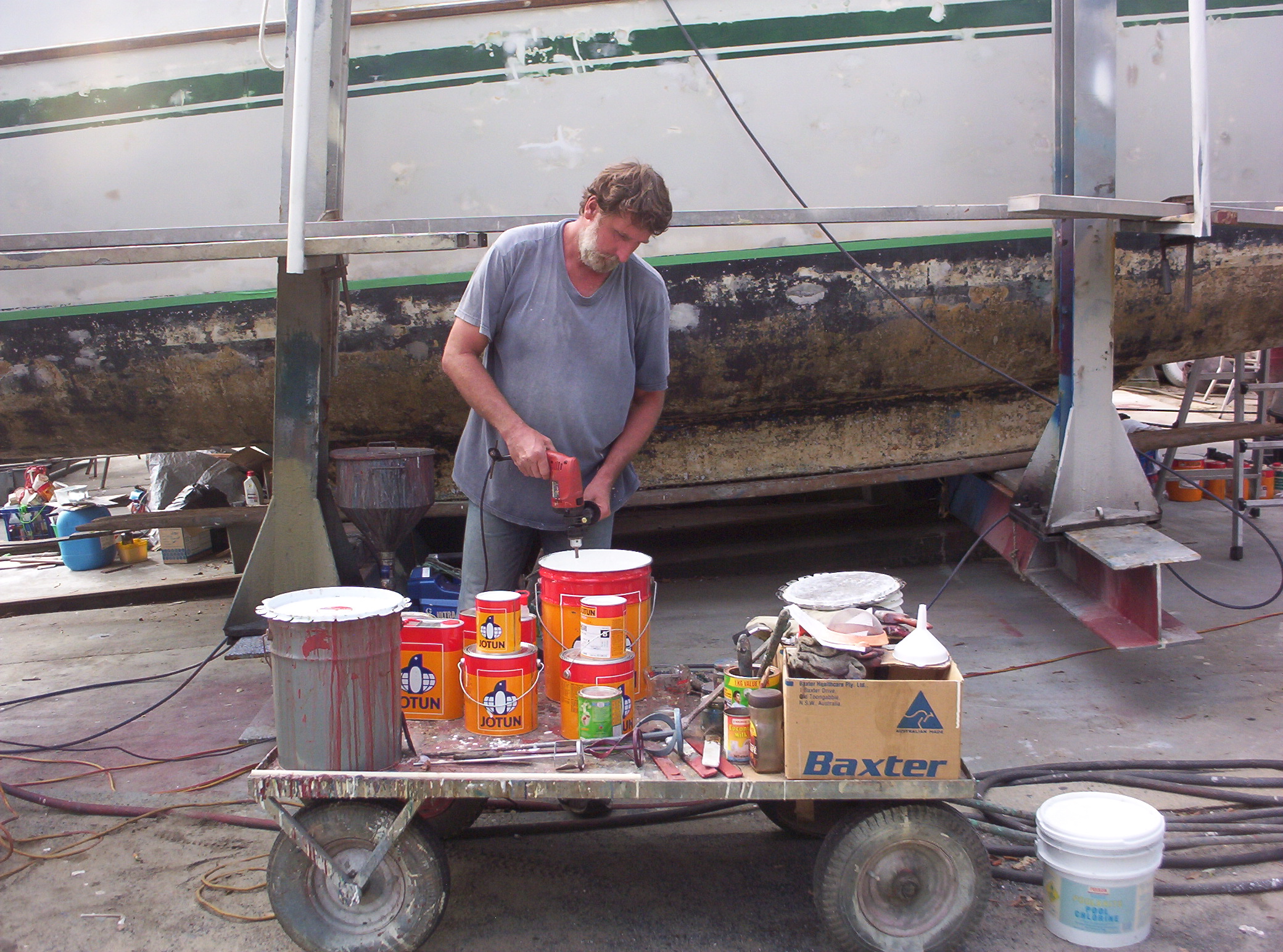 One of the most heartwarming things we can do is to see a long-held dream fulfilled. But we must take care and ensure that everything we do is done in safety. Otherwise, life can take a very dramatic turn.

I was not careful. I did not operate in safety and I could have killed the dream in one fell swoop.

Building a 12-metre catamaran was a dream my husband John had held for many years. Launching would be the culmination of that dream.The shell of the boat was finished and the furniture was in when a fellow scuba instructor invited John for a social dive early one Sunday morning. He had been working flat out on the boat so we both felt he deserved a break.

As he headed off at dawn I decided to paint the saloon and galley furniture with a single pack wood preserver. The pact we had to never work alone with chemicals completely slipped my mind in my desire to surprise him. And surprise him I would. When he set off that morning neither of us could have envisaged what state I would be in when he returned.

We had never used this product previously but the label only said 'adequate ventilation'. I opened every hatch: two 600 centimetre square and six 300cm square. I placed a large fan in the doorway facing it towards the area where I would begin painting then donned gloves before opening the new can. I had hung the cockatiel’s cage outside in a tree but Minka, our miniature toy poodle, remained.

Beginning the job around 6a.m. the solution went on easily and I was happy with the progress. About 1½ hours later I stumbled and the clear liquid sloshed out of the can and over my leg. Quickly, I thoroughly washed myself down then continued.

Having completed the galley and starboard side of the saloon, I moved to the port side where, unknowingly,
I had moved out of the fan’s range.

Suddenly my head started to spin and I felt my body sway. Instinctively, I replaced the lid on the can, grabbed Minka and stumbled out into the cockpit. Taking huge gasps of air I hauled myself down the rear steps
and off the boat.

My feeble attempt to walk to the neighbour’s house was futile. My legs felt like rubber; they would not hold my weight and I collapsed on the ground near their side fence. I gulped more fresh air, but my head kept spinning. Nausea overwhelmed me. Everything around me was surreal.

How long I sat there in the grass is anybody’s guess. Anywhere from 30 to 60 minutes, I would imagine. Time seemed to stretch out and I was living
in a kaleidoscope of colour that spun and twisted in my brain.

At one stage, for some unknown reason I grabbed a nearby hose and turned it on myself. Perhaps I thought I would feel better by cooling myself down. I felt so ill. I remember my main thought was John would return finding me dead on the lawn!

With absolutely no idea how long I had been sitting on the ground, I eventually stumbled to the neighbour’s back door and called out for Barbara. One of the children appeared whispering, “Mum’s in bed.”

“I need help”, I said. “Can you get her for me, please?” Barb rushed out and grabbed me before I would collapse again.

After ascertaining the facts she rang the doctor’s home number and agreed we would meet him at the surgery. She and her husband ran a taxi and limousine service and she piled me into one of their limousines despite my protestations that I was soaking its expensive upholstery.

While waiting, I sat on the grass.

“Don’t go to sleep,” ordered Barbara. “I won’t,” I replied. “It’s just that the grass is soooooo green.”

All my senses were heightened. Stoned, some have suggested. Well, if that is what it is like to be stoned, they can have it. It was the most awful experience in my entire life.

The doctor ushered me into the surgery but he was unsure how to treat the poisoning.

The Poisons Information Centres in Brisbane and Canberra could shed no light as this particular product had not been registered. It was apparently an ‘improvement’ on an earlier product and some of the chemicals had been altered.

As a diver, I understood the benefits of oxygen so suggested that to the doctor. I kept it up until my teeth began chattering but even that did not appear to help much.

It seemed that the only thing I could do was drink copious amounts of water in an attempt to flush everything out of my system. I returned to the house where Barbara set up a bed in a spare room where I would remain for another week.

John returned from his dive, hours later, excited about his experiences that day but I was in no state to listen and once he saw my condition his interesting morning faded into the background.

Over the next few weeks and months I was on a merry-go-round of doctors and specialists.

My GP spent an incredible amount of time trying to find a willing specialist.

A flight to Sydney was initially considered to see an expert in poisonings but, like the Queensland specialists contacted, he was too concerned about becoming involved in litigation and declined to see me.

Surprisingly, a Sunshine Coast specialist was eventually found not too far from where I was living and he was more cooperative.

“This is a text book case of hydrocarbon and isocyanate poisoning.”

He explained just how close I had come to being killed by this chemical. But still there was very little anyone could do to repair the damage. The liver had been damaged but luckily that would repair itself in time.

“You’ve had a lifetime’s dosage of hydrocarbons. It won’t ever go away”, the specialist said. “You’ll always need to be careful.” This meant no aerosols, as the propellants are hydrocarbons and no paints or chemicals with hydrocarbons in them.

Hairdressing salons with more than one operator were out as I could not control the use of hairsprays.

The first thing they gave us was an expensive respirator with instructions no-one was to enter the boat without wearing it. They then did tests to ascertain the levels of hydrocarbons remaining in the boat.

Work stopped for the time being as John had discussions with the product’s scientist/creator who “advised” (threatened?) us not to take them to court as the company had more money than we did. With that unhelpful attitude we refused to deal with him any more so the company’s general manager drove up from Brisbane to see us regularly, bringing a boot load of antifouls and paints to appease us each time.

We eventually accepted a settlement to “keep us out of court”. Along with a sum that would allow us to hire someone to do the work I would normally have done. John hired a young local lad and my son Peter, moved up from Sydney to help. We insisted on a better warning for the label on the tin.

However, questions remained. I had lost my sense of balance. If I stood up in the dark, with no visible reference point, I fell over. Would I be able to sail on the boat that we had spent so much time dreaming about and building?

Was the dream over?

Reality hit hard when we considered the possibility that we may not be able to do what we had been working towards. The decision was made to launch as soon as possible.

We needed to know how I would handle it. The finishing touches could be completed later.

Despite all the trauma of the poisoning so many years ago we have covered many thousands of ocean miles, ten and a half thousand on the last trip, gone to a number of different countries and enjoyed an almost normal cruising life. I was lucky.

It may not have ended up this way.

A walk down the city street was often a drama if renovations were being done on a building. I would have to cross the street to get away from the danger.

Public functions were a worry, too. All of our friends soon got into the habit of bringing pump sprays to BBQs and parties and leaving the aerosols at home.

But strangely, there were a few who refused to believe in the existence of this medical problem and deliberately tried me out.

As the years passed by I was eventually able to go to a hairdressing salon and John could use aerosols on the boat but I would still sit outside in the breeze, just to be safe.

We use hardstands but I take care when chemicals are in use and excessive use of sprays will still see me bolting to safety.

It has now been over twenty years and, while much of the problem has eased, I still need to be careful.

I sometimes find myself feeling nauseous for no obvious reason. I am still careful but in general I feel almost cured.

It just goes to show that one simple mistake can change one’s whole life and future. This incident taught me a lesson about taking all the necessary precautions when using and going near chemicals.

Since then we have been amazed at how many businesses do not supply data sheets to customers.

So our advice to anyone is, when buying any chemical or paint insist on a copy of the product data sheet and read it thoroughly before using the product.