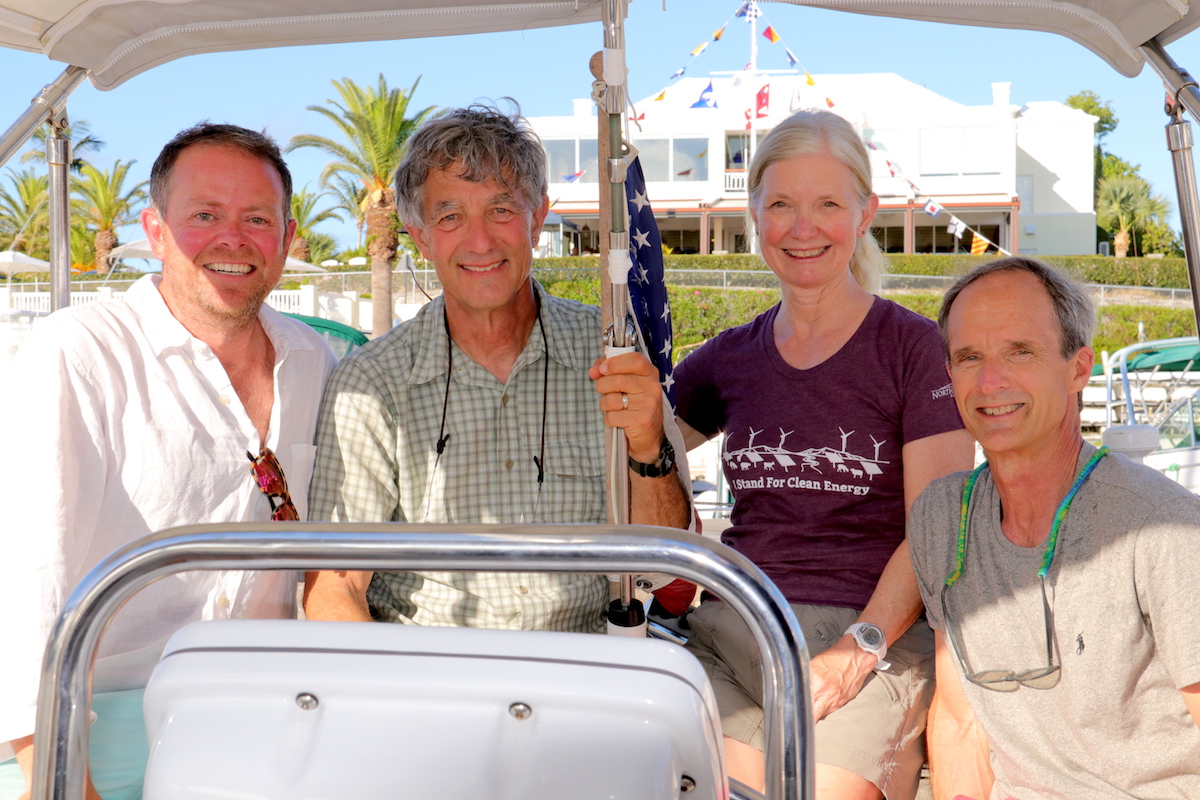 Royal Hamilton Amateur Dinghy Club (RHADC) BERMUDA, June 20, 2019: What’s it like racing offshore with Roy and Gail Greenwald on Cordelia, the overall winner of the 2019 Marion Bermuda Race? In a champagne cork-popping get-together in the cockpit of the 42 foot Valiant double ender, crewmate Daniel Begg pegged it.

“Awe, Man!” Begg quipped, “It’s just a lot of fun. They do a lot of work. They are really dedicated. It’s just an honor to watch it in motion, to be a part of it wherever you can and take direction when needed. Stay quiet and watch them dance.”

(Laughter from the the Greenwalds and Dana Oviatt, Cordelia’s other crew member)

“I’m serious,” Begg says. “They work very well together. They have their roles. They stick to it. They trust each other and they trust us. It’s awesome.”

Roy Greenwald added, “We’ve put 40,000 miles on Cordelia. We’ve been across both oceans so we kinda know the boat.”

Roy is skipper and Gail is navigator. Of their roles in the dance Roy says, “I make the boat go fast. Gail tells me where to go.”

Roy described going out of Buzzards Bay in the 25-30 knot winds and how they fared down the line to Bermuda.“For us, we sail out of Marion. We know Buzzards Bay well. It was blowing and when you have the option [not racing] of just going out for fun, we’d go to Provincetown, turn and run with it. We don’t normally beat into that stuff unless we have to.”

“Cordelia doesn’t point with the racers,” Roy continued. “If we can get out of Buzzards Bay two or three from the back of the pack, we know we have done OK. We didn’t sweat the start… it’s a long race. The crew was ready to tack and we had maybe six tacks out of the Bay.”

One of the moves that worked out well for Cordelia was to tuck in over by Penikese Island. “We tacked right up alongside of Penikese. As soon as we could clear it, we tucked back in. The boats that sailed out in the middle of the bay had more adverse current and that helped us. We had less current.”

“After Sow & Pigs [reef] we didn’t tack a single time. We sailed the entire way on starboard tack. That’s our fastest tack. It was a godsend.”

“As we approached Bermuda to finish, we were pretty sure we were going to be able to carry the starboard tack to Kitchen Shoals… that’s the beacon that marks the east-northeast corner of the reef line around Bermuda… and continue on starboard possibly to the next mark, Mills Buoy. Then to get around the Sea Buoy and sail to the finish off St. David’s Lighthouse, we were all ready to tack.”

“When we got to Kitchen, the wind started to clock to the west-southwest,” he chuckled, “and we were able to carry it right on to the finish line. I think it couldn’t have happened better.”

Preparation is always a key element in winning. Cordelia was definitely well prepared. Roy and Gail Greenwald have done four Bermuda 1-2 races. Roy sails solo to Bermuda and Gail joins in for the return. They know their boat well.

Cordelia was one of 16 entries using celestial navigation only. Ironically, all of the class winners were celestially navigated.

The Marion Bermuda Race encourages celestial navigation as part of its core concept of maintaining the art of seamanship among amateur sailors. This is the base upon which this race is founded. Boats that elect to turn off their electronic navigation systems earn a 3% credit off of their elapsed time for the race. Then the corrected time is calculated. Marion Bermuda is the only US offshore race to do this.

Gail explained, “The last race we did celestially was the 2007 Marion Bermuda Race. I had to get my sextant out and clean it up. I had to review my old materials. We sailed to Nantucket and I took some practice sights. I updated all my performance reductions.”

Back in 2007, some navigators used a device called a Celestaire Calculator to reduce sights. Gail didn’t use one. She never used software for calculations up until now. This year she bought a software package that would help her with sight reductions.

“Dana Oviatt brought his sextant along and helped with the sights. too. It was a team effort,” she noted.

Gail had a whole note book she put together for the race. “In advance of the race you have to figure out which stars are going to be out so you can start looking for them. One of the key things— because the seas were rough— was having the altitudes and azimuth already calculated. We were able to preset sextants and snap our sights quicker. That’s where preparation really paid off.”

“We had a pretty bright sky in the evening [Full Moon]. We got decent star sights but we were always challenged. I used Jupiter once (it was right by the moon) and I also used the moon once.”

“We had trouble getting precise sights the first couple of nights.” Gail noted. “After that we were spot on. We knew exactly where we were. We turned our GPS on about 28 miles from Bermuda [50 miles is allowed] for safety on the approach around the reefs.”

Roy, the skipper, pointed out, “I was glad to have the GPS going on the final approach. We knew we were kind of in the running [for prizes], and I wanted a clean shot to the marks. I didn’t want to be three miles from my marks.” Three extra miles would have added a half hour or so to Cordelia's finish time.

2019 was another small boat race to Bermuda. The light winds in a high-pressure system moved east through the faster, bigger boats and maybe slowed them a little, but not enough to trigger the ’anti-bias’ adjustment.

In 2007, Greenwald remembered that they and other slower boats were leading the fleet overall according to the public tracker. They got caught in a windless hole and were becalmed, going 0.0kts for nine hours only 75 miles from Bermuda.

“We were sitting in the hole,” Greenwald said, “and the big boat crews were at the Royal Hamilton Amateur Dinghy Club bar catching us. Sometimes it goes the other way. If you looked at the weather you could probably predict it.”

“You do need to sail a good race to win your class.” Roy added, “And then you need to be lucky to do well in the fleet.”

Cordelia’s overall first in class and first in fleet finish in the 2019 Marion Bermuda Race comes down to the essentials of ocean racing— a solid boat, preparation, teamwork, and having fun… and maybe getting a nice wind shift at the end… and of course, a spot of luck.