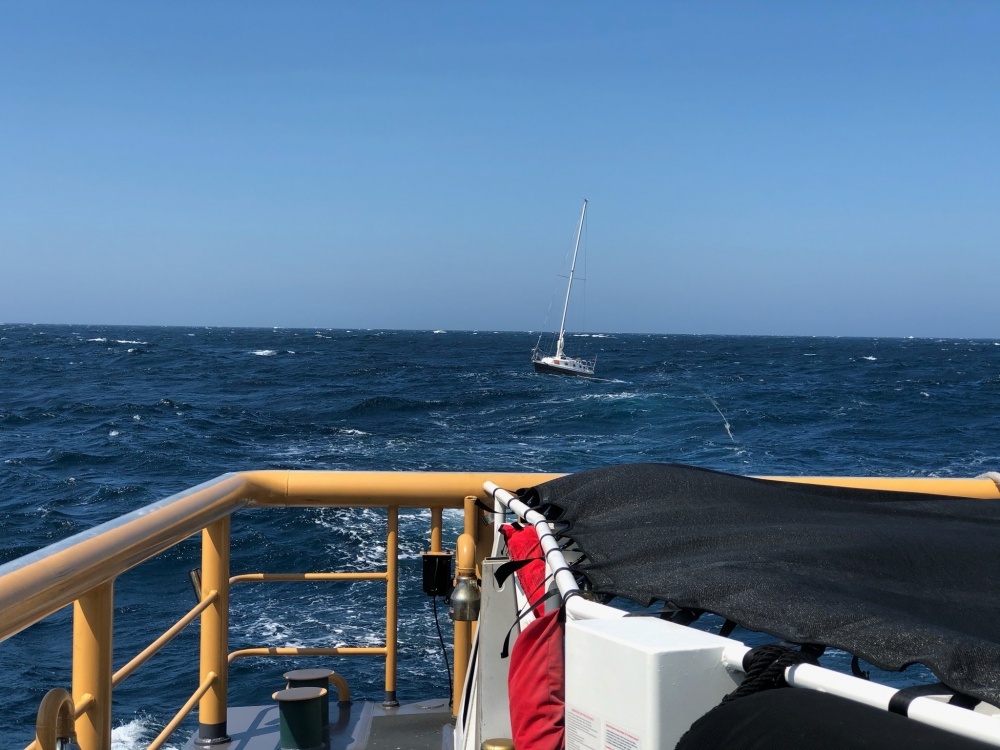 The CMA CGA Aquila crew reported a member aboard the Sirus had suffered a minor head injury and the vessel had damage to its sails, engine and steering components. The Sirus crew said that they had been out to sea for 13 days on their route from Coos Bay, Oregon to San Diego and were low on food and water.

The CMA CGA Aquila crew transferred food and water to the Sirus and remained on scene with the Sirus until the Seanna arrived.

The Polar Enterprise crew arrived on scene with the Sirus around 2:35 a.m., Saturday and remained on scene until the Coast Guard crew aboard Tern arrived.

The Tern crew arrived on scene with the Sirus around 3:05 p.m., Saturday and put the Sirus in a stern tow en route to Bodega Bay.

During the transit, the Tern crew reported hazardous sea conditions and Coast Guard watchstanders recommended diverting course toward the San Francisco Bay to provide a safer ride in the sea state.

The Tern crew met a Coast Guard Station Golden Gate 47-foot Motor Life Boat crew in the vicinity of the Golden Gate Bridge and transferred the tow around 8:00 a.m. Sunday.

The MLB crew completed the tow and safely moored the vessel at Pier 45 in Sausalito around 8:45 a.m. Sunday.

“These folks are lucky to be alive,” said Capt. Howard Wright, the deputy commander of Coast Guard Sector San Francisco. “This happy outcome was the result of tremendous cooperation between the Coast Guard, private companies and vessels. I especially want to thank the crews, agents and owners of the CMA CGA Aquila, Seanna, and Polar Enterprise for selflessly safeguarding the lives onboard the Sirus until Coast Guard crews arrived. This case highlights the vital importance of being properly equipped when starting a voyage and creating a float plan to ensure the Coast Guard is notified if the voyage does not go as planned.”

The Sirus crewmembers are scheduled to make repairs to their sailboat in San Francisco prior to continuing their voyage.