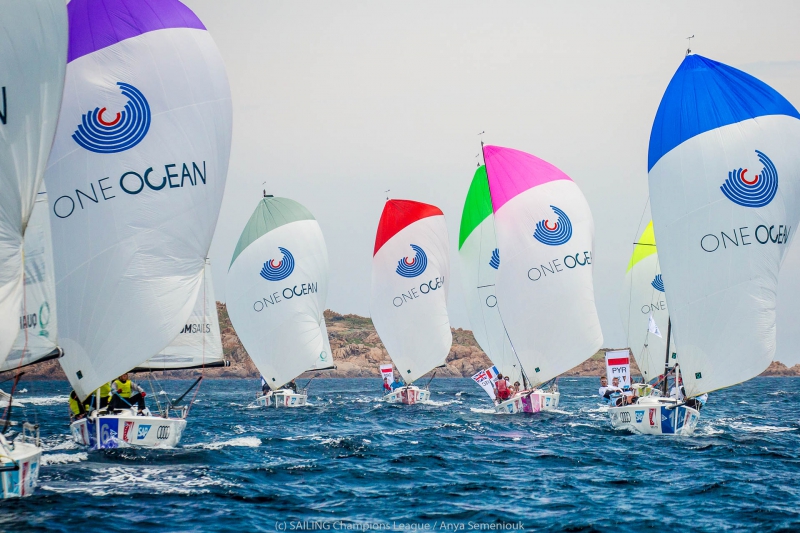 Porto Cervo, Italy. 26 May 2019. Bad weather prevented racing being held on the last day of the One Ocean SAILING Champions League. The classification therefore remains unvaried from yesterday, with victory going to the team from Circolo della Vela Bari.

During the three days of competition, 39 races were held, completing a total of 13 flights valid for qualification for the final scheduled to take place in St. Moritz from 15 to 18 August. After initially postponing the start of racing to 11.30 a.m. today, the Race Committee communicated their final decision not to race due to the weather conditions, with wind varying from 18 knots to gusts of 26 knots and big waves, making the transfer of crews onto and off of the YCCS J/70 fleet unsafe.

The winner of the second qualifier in Porto Cervo is therefore the Italian team representing the Circolo della Vela Bari, followed by the Regattaclub Bodensee and the Verein Seglerhaus am Wannsee in second and third place respectively. Completing the line-up of the first seven teams to qualify for the final are (in order): Seglervereinigung Kreuzlingen, Kungliga Svenska Segelsällskapet, Société de Regates Rochelaises and Yacht Club Breitenbrunn.

Simone Ferrarese, helmsman for Circolo della Vela Bari commented on the victory: “It's a pity that we couldn't compete but the conditions were not safe. I have to thank the crew who were perfect, we had a great time. We now have the final on the lake in St. Moritz, where the conditions will be different than in Porto Cervo, like last year we will do our best.”

Today it was the turn of Swiss sailor Tom Rüegge of Seglervereinigung Kreuzlingen to answer the question of the day on the theme of sustainability. When asked to explain what actions he puts into practice to avoid plastic pollution Rüegge said: “Besides sailing I also practice kite surfing, so I'm frequently at the beach and often participate in beach cleaning initiatives organised by various associations. Of course, when I see rubbish in the water, I always try to recover it and bring it ashore.”

YCCS Commodore Riccardo Bonadeo commented: “We were delighted to have you all gathered here in Porto Cervo once again for the fifth consecutive year, and I want to thank all the participants, the Race Committee, the international jury, the staff of the YCCS and our partners. Thanks also go to the SAILING Champions League, we are pleased to host events such as this in which, besides a passion for the sport of sailing we also share a love of the sea. The regatta named after the One Ocean Foundation confirms these common values, we hope to see you in 2020 to work together again and continue to raise awareness of the importance of protecting the ocean.”

Prizes were awarded to the winners at the prize giving ceremony at the Yacht Club Costa Smeralda. The winning team received an inReach Mini (GPS Satellite) from the event's technical partner, Garmin Marine, which when connected to a compatible device gives access to topographic maps, colour aerial imagery, and other useful functions for navigation.

The next event scheduled at the YCCS is the Loro Piana Superyacht Regatta from 3 to 8 June.