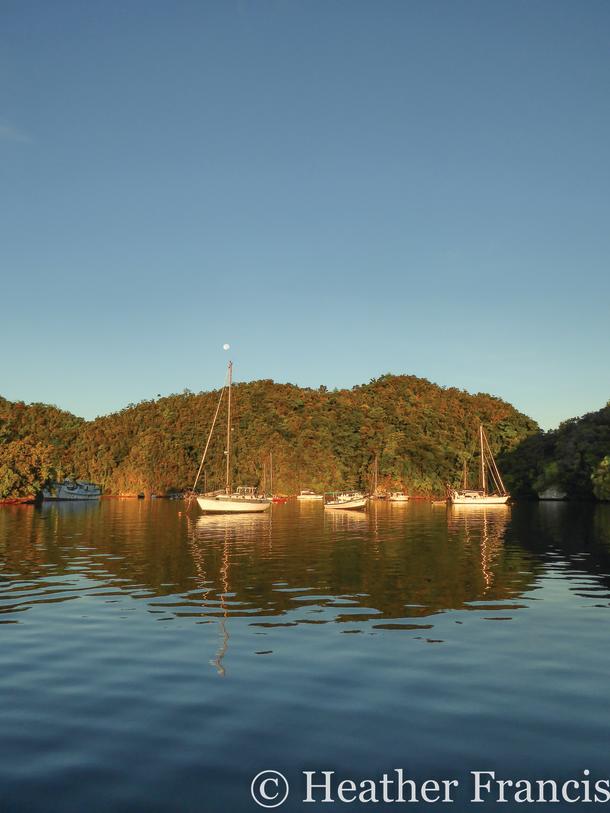 I once read that humans are incapable of remembering pain. That is to say that although we recall an event as painful, we actually cannot evoke that physical sensation of pain we experienced. This surely explains why women are willing to have more than one child; birth, I am told, is right on the top of the “holy f#@k that was painful” scale.

I also believe this is why sailors regularly return to haul up anchor and put to sea, this is one I know.

Our passage from Papua New Guinea was a rather long drawn out affair. Since we were crossing the equator this was somewhat expected, in the beginning. We were assured, by everyone who has sailed the route before us plus our weather router who we employed for the first time this passage, that once we got over the equator and through the doldrums the winds would fill in.

Being good little sailors we believed and sailed due north out of Kavieng, hoping to find the shortest line though the windless zone as possible. Sail we did for the first three days, although the wind was out of the north west and on the nose, the sea was calm and the ride was comfortable.

Of course we got tripped up on that imaginary line and ghosted across zero degrees slow enough to watch the numbers on the handheld GPS count down, like the New Year’s party we were hoping to have in Palau. The crossing happened, as it did the first time on the way to the Galapagos, in the dark despite our best planning. But all souls were present and we celebrated by pouring ourselves a glass of rum, making sure to tip a bit to Neptune in hopes of winning his favour. Note to other sailors: apparently Neptune is not partial to Bundaberg’s Master Distillery Rum, save the good stuff for yourself.

The stillness of the night and the beautiful sunrise that followed shortly after did give us pause to reflect on the momentous occasion. It had been six years since we had Kate up north and, although I have often thought of the southern sky as familiar, I was looking forward to watching constellations of my childhood guide us on our journey for a while.

The rest of the passage, however, did not go as planned.

After eking our way north we were forced to motor to free ourselves, not from drifting a state of sail we do not mind participating in, but from wallowing around in the swell as we got pushed eastward by current. Over the next three days we put a whopping 40 hours on the engine, a personal best/worst for us.

Although we clawed our way further north at an ear-splittingly slow pace we did not find much wind. When the wind did finally fill in it was not from the prescribed direction, but we happily glided along close reaching and pointing exactly towards our destination.

Ten days into our passage things were looking up; we were making progress, the conditions were comfortable and if we could keep pace we might even make port in time for Christmas, even if we had to pay overtime fees when we arrived on the morning of the 24th. Then came a couple days of dirty weather.

We battled sudden violent squalls, sat in the rain for hours on end and buoyed our spirits and warmed our cockles with the occasional glug of rum in our midnight thermos of tea. Conditions continued to build and soon we were rocketing along on only a small section of headsail in 30 knots to 35 knots of breeze.

For days the distant northern horizon was dark. Dark like I have never seen before. Cold and calculating and violent looking. A purplish, impenetrable, metallic grey. But we were sailing west. For days Steve wanted to sail almost due west despite the fact that we still had to climb another two degrees north to reach Palau. For days I wondered what his reasoning was.

Then we got the call from our weather router.

Located approximately 50 nautical miles to the NE of us was a low. A low that was deepening and moving fast, thankfully towards the NW. We were advised to alter course for the next 24 hours to 36 hours and let it pass. So, on December 20th, we altered course and sailed away from our destination and all hope of arriving before Christmas.

A few hours later we got considerably more detailed information from another boat nearby. That fast moving system turned out to be a tropical depression, whose potential to deepen into a typhoon in the next 24hrs to 48hrs was high. Not only that but the system had been on the radar of the forecasters for the last several days down to around 4°N. This explained the crappy conditions we had been experiencing for the last three days.

The system did deepen and develop into a typhoon, the Asia-area word for a cyclone or a hurricane. We had sailed through the toddler stages of Super Typhoon Nock-ten, which on Christmas day hit the Philippines with a ferocious roar and has been entered into the record books as the most intense storm to hit land on Christmas Day for the last 60 years, anywhere on the globe.

Although the skies lightened when the depression moved off, so did the winds. On December 24, with 193 nautical miles to sail, we were left adrift in a confused sea sails down and everything clanging around.

193nm is oddly extremely close to our best distance sailed in a 24 hour period. 120nm in 24hrs is an average speed of 5kn, very doable. I was still hopeful the wind would fill in and we would arrive in Palau on Christmas Day, with enough time to spare to unpack the boat, chill a bottle of wine and the four cans of beer we had saved, hang up some lights and decorations and cook a nice Christmas dinner all before it got dark.

It was not until 12 hours later that the winds filled back in. It was as if someone had flicked a switch at 0600, the wind just disappeared then just as suddenly at sunset, the switch was flicked back on. As the hours drifted by and all of these lovely possibilities evaporated, my mood darkened deeper than the northern horizon. In my fog of sleep-deprived frustration I let the disappointment get the better of me.

After we raised sail I grumpily ate dinner and I went to bed without a goodnight, sprawled on the floor hoping to catch up on some sleep: you cannot fall off the floor.

I sat my midnight watch with a scowl on my face, even though there was no one there to see it. All I wanted to do was close my eyes, fall asleep and pretend the whole thing was not happening. And at 0200 that is exactly what I tried to do.

But, as the Grinch so wisely noted “you can’t keep Christmas from coming,” when I woke at 0600 I was greeted by a breakfast of hot polenta sprinkled with the last two pieces of bacon and a smile from my jolly elf, Steve.

On the tree, which I had put up somewhat ingeniously if I may say so myself several days before in a spurt of holiday hopefulness, was a selection of ‘presents’. Hand drawn cards noting all the things Steve wanted to give me when we got to port.

Under the tree was my stocking, brimming with bits and pieces Steve had collected around the boat, things he knew I liked or would make me smile: a packet of coffee, a tin of teriyaki flavoured tuna. Like the Grinch I suddenly felt my heart burst out of chest, growing two sizes in gratitude for the fact that Steve not only put up with me but showed me what Christmas was really about.

As it turned out Christmas day was beautiful. We had perfect winds, calm seas and clear skies.

After Steve went to bed in the morning I had a warm shower in the cockpit and sipped some fruitcake inspired tea. For lunch I dug out the bottles of olives and sundried tomatoes that I had been saving, cut some cheese and salami and opened a box of not-stale Jatz crackers. We sat together in the sun enjoying a cold beer and a picnic lunch while listening to Christmas music.

Squirreled away at the bottom of the freezer was the curry chicken cassoulet I had made back in PNG and vacuum packed. We had it for dinner, still eating out of our plastic boxes like every meal eaten on passage, while watching a spectacular sunset together.

That night the skies were clear and full of stars and for the first time in many years, I saw the big dipper.

Two days later on the 27th, after stalling outside the reef for eight hours waiting for daybreak, we cleared Customs in Palau. When we tied up to the mooring I was a little disappointed the journey was over. After 20 long, sometimes trying days at sea I felt like I could keep going. As if I could only remember the sweet spots, despite the fact that I had lived and logged all the the painful bits.

The night before, in the dark I wrote this in my journal: “now, with the prospect of land on the horizon, literally as Palau is right in front of us, that familiar feeling of disappointment is starting to creep in around the edges. Disappointed that the journey is over, that this incredible, vast and ever changing blue existence is about to be interrupted by land – solid, immoveable, unforgiving. That this beautiful, simple, raw state of mind will be temporarily lost. It takes several days out here to become empty enough to feel full and only a few hours ashore to be full enough that you are empty.

The trouble is never letting go of everything, it is holding on to the nothing that you find out here. Not cluttering up the beautiful space inside you that only the ocean can help discover.”

That is why we are looking ahead to our next passage. ≈