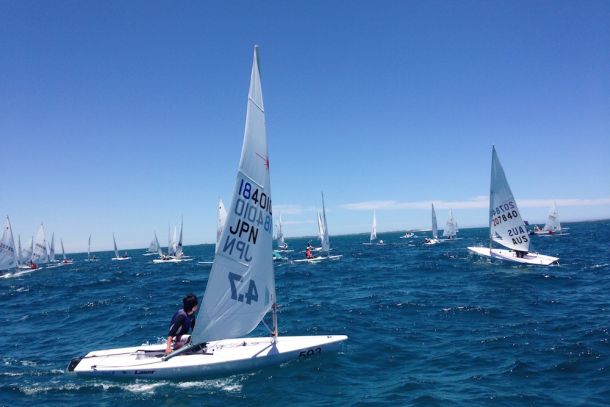 The first day of the Australian Youth Championships started with a southerly breeze which shifted considerably, forcing race officers to hold the start until the breeze settled.  By the second race, the breeze had settled into a typical south westerly “Fremantle Doctor” with short waves keeping competitors on their toes.

Two races were completed across all fleets with racing resuming at 12 p.m. tomorrow, Thursday, 8 January 2015 with four races scheduled.

WA’s Nia Jerwood and Lisa Smith could not have wished for a better start to their Youth campaign when they defeated national 420 champions Emerson Carlberg and Lachy Gilmour to win race one. After two races there are two female crews in the top six with NSW pair Dana Tavener and Cathy Pagett holding sixth place.

At the top of the table is the Hong Kong crew of Calum Gregor and Hugo Christensson.  Carlberg and Gilmour lie fourth at this early stage and have the job ahead of them in this class fleet.

Victorian Hamish Fleetwood leads the Laser 4.7 fleet after the first race, with national champ Brodie Riley fourth. Between these two are Noah Taylor (ACT) and Tasmanian Sam King. WA’s Zoe Thomson shot straight to the top of the female category and is fifth overall.

As expected, the battle for supremacy in the Laser Radials is intense.  WA’s Conor Nicholas, fresh from his third place in the Nationals, has thrown down the gauntlet to national champion Alistair Young by winning both opening races.

Only four Hobie crews have entered the Youth Championships, but the competition is still tight as 2014 Australian Sailing Youth Team member Shaun Connor, who is sailing with Sophie Renouf (NSW), explained: “We were very happy with our two bullets today. It’s pretty close racing and with only four boats it definitely allows the others to catch up, which keeps it fairly tight. The conditions were mixed, fairly light and patchy in the first race and then it started to build in the second race and got fairly fresh.”

The 2015 Australian Youth Championships see 175 U19 sailors from six states and two territories compete in six boat classes (420, 29er, Hobie 16, Laser 4.7, Laser Radial, Bic Techno 293) for the National title honours. In addition, four sailors from Japan as well as 12 from New Zealand and one Hong Kong crew are contesting the Championships. Host Western Australia has the biggest contingent at the start line with 94 sailors, followed by New South Wales (54) and Victoria (38).