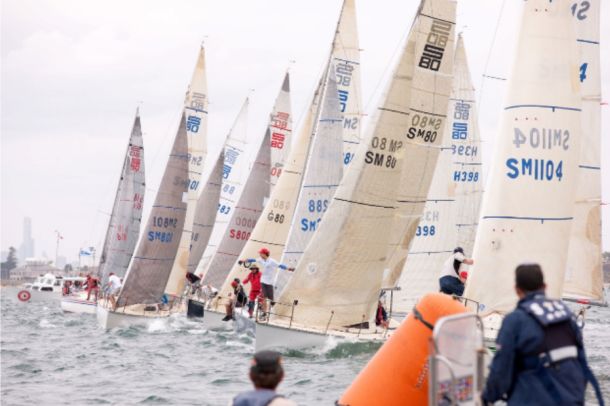 Despite being more than 30 years old, the S80 fleet is the largest one-design keelboat class in Victoria, increasing in popularity with fleets racing out of Hobson’s Bay Yacht Club and Sandringham Yacht Club. Other S80s race out of Royal Brighton Yacht Club, the Royal Yacht Club of Victoria and Royal Melbourne Yacht Squadron.

Perth naval architect Kim Swarwick designed the one-design 8-metre LOA (26’) boat for both racing and cruising and with the intention of providing, at a reasonable cost, high performance racing for inshore and limited offshore events. For racing S80s normally race with a crew of five.

Host club, Royal Brighton, on Port Phillip’s eastern shore, has a big day tomorrow as, in addition to first two scheduled races for the S80 class, the final two races of the Prince Philip Cup for the International Dragon class have been postponed until tomorrow morning because of unstable and stormy weather in the Melbourne area.

RBYC sailing manger David Staley said today that it was hoped to start the first race for the Dragons at 9.30am and have the two races completed before the start of the S80 championship at 12 noon.

Pre-regatta favourite for the S80s is defending champion Intrusion, skippered by Luke Reinehr from Sandringham Yacht Club. A long time supporter of the class, Luke is consistently at the front of the fleet.

Tomorrow’s racing will start with a short windward/leeward race, following a 13 nautical mile longer race on the bay. Three races are scheduled for Saturday and two for Sunday.