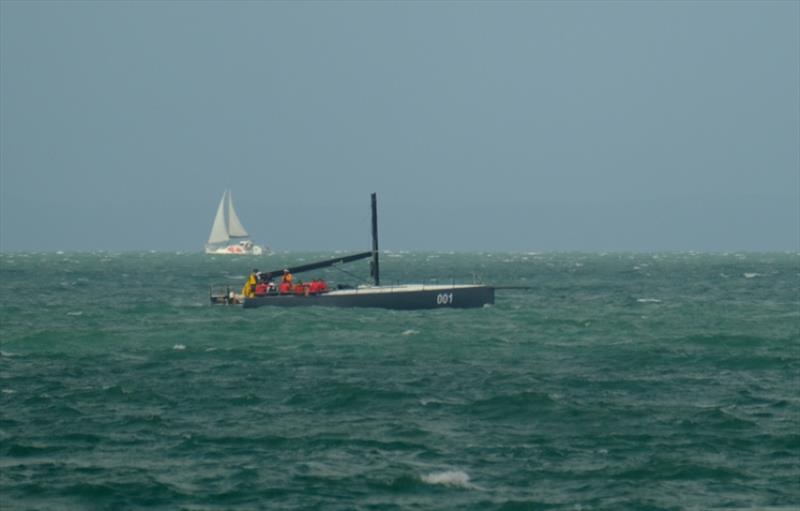 Ichi Ban, Matt Allen’s super charged TP52, has lost her rig in the Brisbane Gladstone race shortly after the 71st edition of the event got underway off Shorncliffe at 11am yesterday in reaching and running conditions.

Allen and his crew cut the rig free and motored back to Rivergate Marina in Brisbane. All on board are safe.

“We were less than an hour into the race, and contrary to speculation, the conditions were quite benign – around 18 knots – reaching along in flat water on Moreton Bay,” Allen said.

“The rig broke around 3 to 4 metres up – that was about it. We made sure everyone was OK on board, cut the rig away and are going to try to retrieve it this morning. And we’ll work out where we go from there. We have a spare rig, so it’s all good,” he said of Ichi Ban which has won and placed in every major event she's entered.

“Nobody wants to break a rig, but at least we were close to the start and nobody was hurt.”

Russell McCart’s Farr 40, Night Nurse, was also an early casualty after breaking her main halyard. Then Craig Salter reported Dream had hit a submerged object, sustaining damage to the stern. The Inglis 38 was abeam of Rainbow Beach at the time and was motoring back to Mooloolaba.

Peter Harburg’s super maxi, Black Jack, took line honours in the early hours of this morning, in the time of 16 hours 56 minutes 33 seconds. She finished less than 3 minutes outside of her 2018 race record of 16hours, 53 minutes, 57 seconds. Overall victory is still up for grabs.