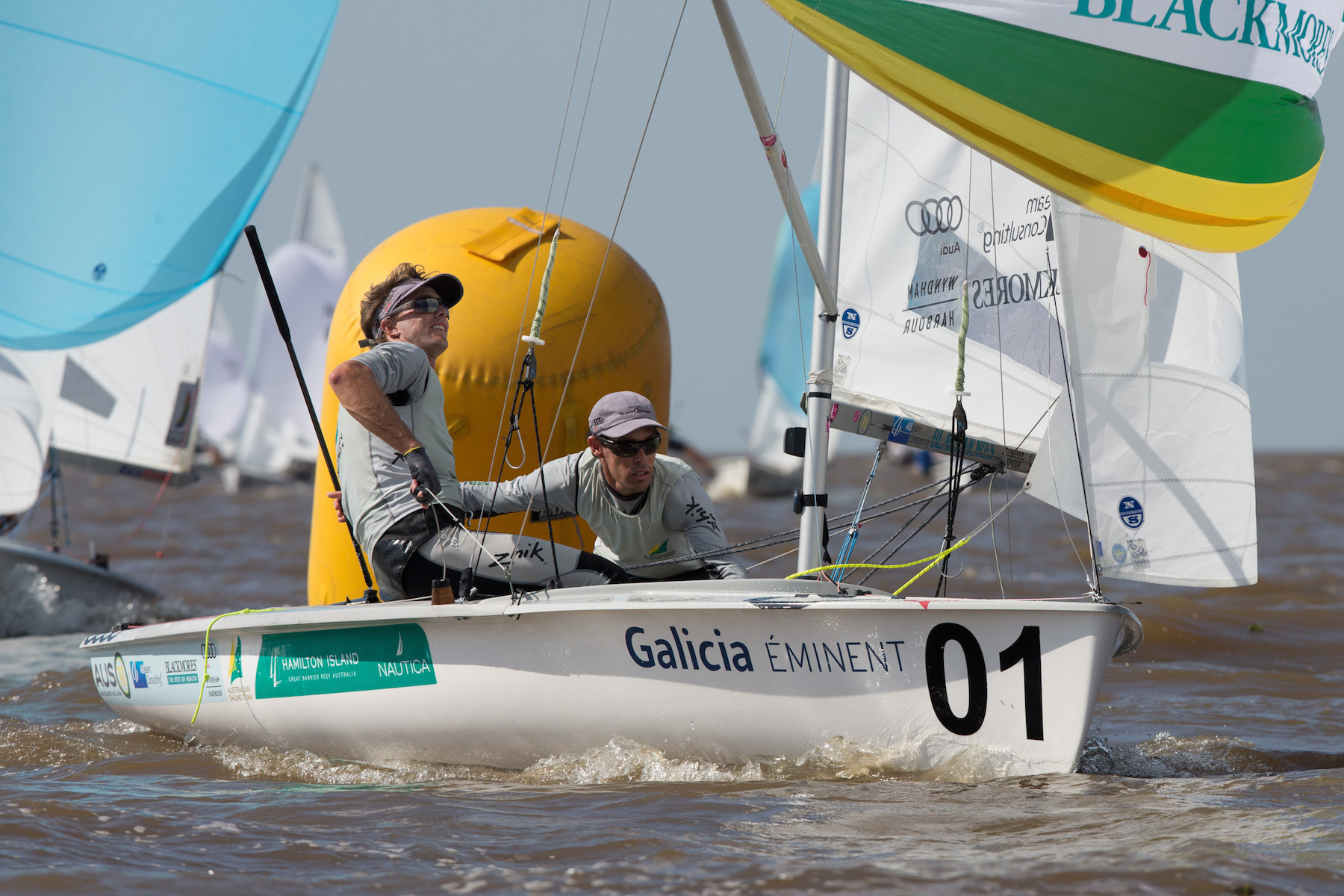 Belcher and Ryan at the 470 Worlds in Argentina. Photo Matiaz Capizzano.

It will all come down to the Medal race with defending World Champions Mat Belcher (QLD) and Will Ryan (QLD) wrapping up fleet racing at the 2016 Men’s and Women’s 470 World Championships in Buenos Aires, Argentina on Friday, 26 in third.

Two races were completed on the penultimate day of the regatta with Mat Belcher and Will Ryan posting an eighth and a second to hold on to third overall after a total of ten races and ahead of tomorrow’s, Saturday, 27 February 2016, Medal race.

On another tough day with lots of weed obstructing the way of the sailors, Croatia moved to the top of the lead board and now hold a sixteen points lead over Mat Belcher and Will Ryan in third, with three points separating Australia and New Zealand, who are in second.

“Again it was a tough day with plenty of weed. It's just bad sailing. Like everyone else, we’re spending all our time clearing the weed to actually sail the race. But we’re still in with a chance. We closed the gap to second so looking forward to tomorrow,” Mat Belcher said.

And recapping Friday’s racing he added: “The first race we were forced to do an outer loop with the girls as there wasn't any chance to get back down to the start because of the weed. We raced it well but got caught up in a few weed islands, which hurt a bit.”

“In the second race it became too shallow as we were hitting the bottom with our boards so we had to move the course again which proved better. It was heavily shore influenced which made it tricky but we managed a good race. Apart from the first day's racing we were really happy with how we came back. Looking forward to a good rest and fight for tomorrow.”

It has been a long week for the pair and despite a challenging start to the regatta and coping with a ‘weed-obstacle course’, the pair had a strong come back from 33rd on the first day to third on the penultimate day.

Leading Croatians Fantela/Marenic were the last team to win a 470 World title, before the six year run of World title success by Mat Belcher, three golds with Malcolm Page and three with Will Ryan.  Saturday’s Medal race will be ultimate decider on who will come out on top, but the Croatians are in a great position.

“It’s been really hard racing here having only the one fleet and with the conditions we’ve had, the regatta has become a bit of a marathon. The weed has made it very difficult to race our normal style and after not a great day one, we have been happy to survive each day. We are in medal contention and still have a small chance to win and it's never over until the end. So as always we will go out there and try our best,” Wil Ryan said.

In the Women’s fleet, two races were completed on the penultimate day with Australian Sailing Team’s Carrie Smith (WA) and Jaime Ryan (QLD) posting a 24th and 27th to finish the regatta in overall 18th.