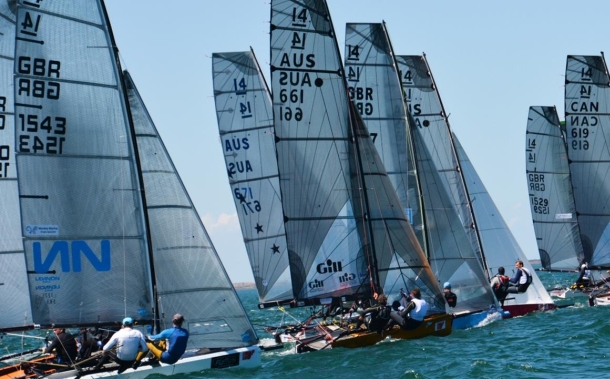 Australian skippers Brad Devine and Lindsay Irwin did their best to upset the dominance of the British today fighting them with vengeance in Race 4 of the International 14 World Championships being hosted by Royal Geelong Yacht Club.

They put the pressure on series leaders Glen Truswell and Sam Pascoe to ensure the British team’s win didn’t come easily. It’s been hard to fault that team’s performance. Even after choosing to re-start the race to avoid an OCS, they quickly grabbed the lead by the first mark and then never let go.

In second over the line was Devine and crew Ian Furlong, who was also a nervous starter thinking, like Truswell, they were over early. Once off the line they followed the fast German team of Goerg Borkenstein and Eike Dietrich around the course until one poor tactical decision by the German’s gave Devine the opening to power through into second.

Irwin was just so close to taking third place, but the disappointed skipper admitted it was tough racing. “These guys are really, really good. You don’t have to do very much wrong to get wrong-footed. We’re still pretty happy with our fifth,” Irwin said.

Third over the line was instead taken out by Ben McGrane and James Hughes (GBR).

Geelong turned on stunning race conditions on Corio Bay for the 67-boat fleet with a sweet 10 to 12 knot south-easterly and gentle chop making for fast legs.

After an hour’s delay as the breeze finally built and settled in, the committee boat end of the start line was jam packed with anxious pointscore leading boats.

Luckily Truswell was at the starboard end so he went back around, just in case. “I believed we were over the line. I was trying to positon the boat and doing a really bad job of it and Sam was absolutely convinced we were over and I had nothing to believe we weren’t,” Truswell said.

Devine said McGrane, who was to leeward of him, was panicking a bit on the start and so was Devine. “We thought we might have been close. We checked with the finish boat at the end of race to make sure we were clear, which we were. That was a huge relief,” Devine said.

Truswell got around the committee boat really quickly and then headed right. “We got a clear lane. There were no boats in it and our boat did its magic. We found a huge amount of speed.
“It was a shifty beat, but we got the better of the shifts. We were nigh on amazed when we got to the windward mark first,” Truswell said.

Close on Truswell’s stern at the first mark was Borkenstein. They had a strong start and were very pleased to be in second place early in the race and keeping Truswell on his toes. “We had a good downwind triangle, but we started to lose a few boats due to weed on our rudder. Our boat is an older design while the other teams are smarter and quicker,” Borkenstein said.

It was a tactical decision on the second upwind leg that cost them their second place. There was a big shift, where Truswell went left. They tacked away and lost touch with Devine who was behind them in third place.

It wasn’t only poor tactical decisions that caused upsets today. There was a significant amount of weed on the course, far more than any other race day. Truswell stopped several times each leg to clear the weed from this rudder.

Defending World Champion Archie Massey must have been saying to himself, if only. He was buried on the start line, fought back from sixth around the first mark to fifth at the bottom mark first time, however was then forced to take a costly penalty. “Brad Devine caused the whole thing,” Irwin said.

“Brad decided at the leeward to clean his foils so he parked his boat fair and square on the rhumb line and started cleaning the weed off. So we came around behind him. We put our bow down around him. Archie came around behind us and put his bow inside us. As we came around Brad we came up on the wind and windward boat got touched. So we asked him nicely to do a 360 and he obliged us,” Irwin said.

Finally, by the finish Massey had clawed his way back up the fleet to finish in fourth place.

For Irwin, a stunning display of speed earlier in the afternoon turned sour late in the race. “We were third at the last leeward mark, but then we dropped two places on the last beat. It might have been because of a combination of weeds and tactics,” Irwin said after finally finishing in fifth place.

Truswell was complimentary of the Devine’s attempt to unseat him from first place. “Brad (Devine) was right up there with us. He kept making inroads on us and then we squeaked them back out again. He was travelling really well today,” Truswell said.

After four races the top three overall places remain in the hands of the British with Truswell/Pascoe in first place on five points, McGrane/Hughes in second place on nine points and Massey/Hillary in third place on 16 points. In fourth place overall is Devine/Furlong with 18 points and in fifth place is Andy and Tom Partington with 27 points.

On the Australian Championship pointscore, Devine retains first place with five points ahead of Irwin in second with nine points.

Three races remain in the seven-race regatta. One drop is allowed after the fifth race which is scheduled to start at 2pm tomorrow.