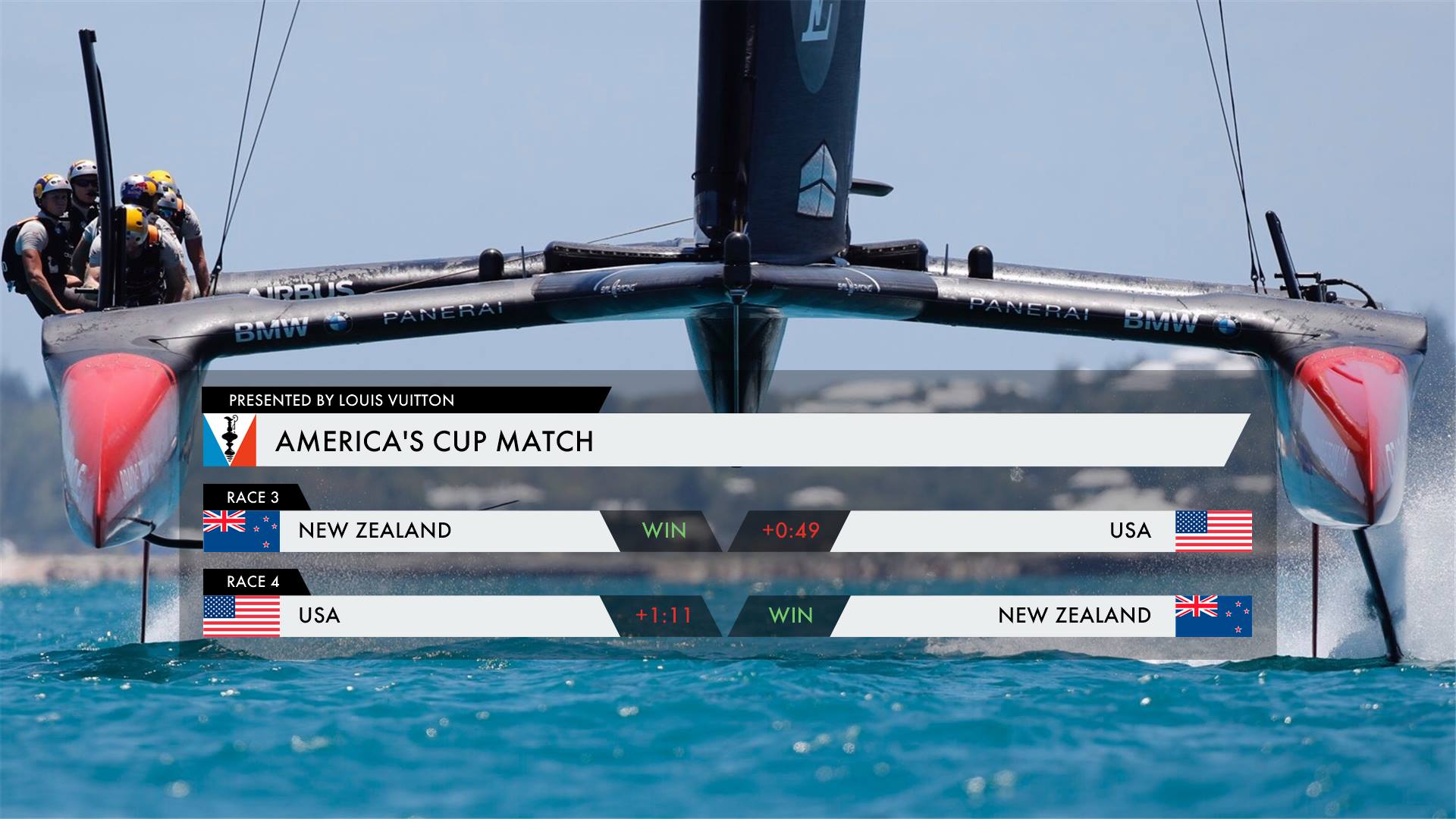 Day two of the 35th America's Cup saw a slightly stronger breeze of around 10 knots and discussion prior to the race centred around the choice of daggerboard.

The New Zealanders can carry their light air boards in a slightly higher wind range than Oracle, so they had opted for the same set-up as yesterday. Oracle, gambling on more wind, had come with their medium boards in place.

The first indication of who had guessed correctly came off the startline. After a non-confrontational pre-start, both boats kicked off at speed and sprinted to the reach mark. Oracle was in the usually preferred windward position with a better angle but they could make no inroads. Peter Burling on ETNZ kept his overlap intact and the boats were credited with the same time as they bore away.

Oracle misjudged their first gybe, touched the water, fell into the Kiwi wing wash – and the race was effectively over.

Spat out the back, they had to throw an extra gybe to get separation at the bottom gate. The Kiwis were again faster and higher on the beat, the lead extended again on the reach, the beat, the reach… and the Kiwis had won a third straight race, this time by 49 seconds.

There was a brief moment of hope for the American boat at the second pre-start when the Kiwis misjudged a gybe and stopped dead in the water. Oracle attacked and went for the hook, but both boats were slow on the line and the Kiwis could accelerate faster. They broke the overlap, got around the reach mark four or five boat lengths ahead and again, the race was over early. The New Zealanders have never been overtaken when leading at the first mark and today was no exception.

Sailing faster and deeper on the runs and faster and higher on the beats, there was absolutely nothing the Oracle crew could do. Tactician Tom Slingsby looked a very worried man as he searched up the course for non-existent wind shifts and the f-word was slipped into the instructions to his skipper.

Meanwhile, all was quiet on the Kiwi boat, with the cyclors pumping out the watts to keep the oil flowing and Burling, Tuke and Ashby keeping themselves between Oracle and the next mark. Manoeuvres were perfect, with the boat barely slowly through the tacks and gybes.

By the finish line the margin had blown out to 1 minute 12 seconds, the Kiwis had won a fourth straight race and were 3-0 up in the best-of-13 series*. Commentator Ken Read summed it up when he said, “The Americans are in big, big trouble.”

There is now a five day break until racing resumes and the American team will need every second of it.

Skipper Jimmy Spithill, the man who engineered the dramatic come-back in San Francisco four years ago when the Kiwis were leading 8-1 in a first-to-nine series, said, “We've been here before.”

Reprising his consistent line at media conferences during that 34th Match, he insisted that the Match is not over.

At the press conference later, he expanded on his comments: “If we were forced to race day after day we’d be in some serious trouble at the moment. This break coming up is a massive opportunity for us as a team to go away and regroup.

“Everything will be put out on the table, nothing will be off limits, and over the next five days our incredible shore team will be looking at every aspect of our boat. Nothing will escape our eyes, I can guarantee that. Whether it’s system related, appendage related, sailing technique or strategy, we are going to look at absolutely everything.

“The motivation is always there, the team is hungry and we’re a very competitive group, but we are also a candid group and it is quite clear we need to make some changes. We feel that with the resources we have here we can make the changes to improve the boat and give us more speed. It looks like we have some good sailing days coming up over these next five days so we’ll be into 24 hour shifts.

“We’ve been in a situation like this before and we’ve had less time. We’ve got five important days and we’ll be using every single hour of them. We have to respond.”

Knowing the problem and being able to do something about it may be different beasts, however. We will know when racing resumes next Sunday morning, Australian time.

* Oracle took a one point lead into the Match courtesy of winning the preliminary series. ETNZ therefore started on minus one point and now needs four more wins to take the Cup. Oracle still requires seven wins.