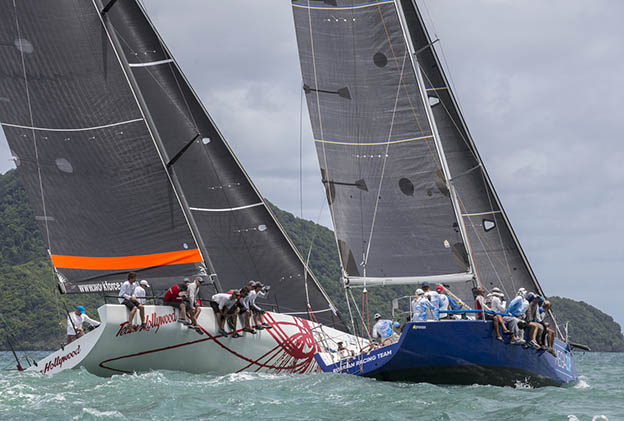 Team Hollywood on their way to winning IRC Zero. Photo by Guy Nowell.

PHUKET, Thailand – The 2019 Cape Panwa Hotel Phuket Raceweek will go down as one of the most challenging yet – challenging for sailors, Race Management and organisers, and despite those challenges all classes got in a series of up to seven races. A steady 8-10 knots on the final day delivered a good finish to the regatta, with many titles going down to the wire.

East Marine Emagine (AUS) got the better of Team Hollywood (AUS) winning two of the three races in IRC Zero today, however Team Hollywood bounced back to win the final race and secure the 2019 IRC Zero title.

Three wins from three races for East Marine Emagine (AUS) in IRC I see them leapfrog their nearest rivals and finish top of the standings to claim their second title in four years. Defending champions AquarII (AUS) sailed consistently throughout and were never off the podium, however, they have to settle for second place overall. Scoring well early in the series, a string of fourth place finishes later on means the Russian crew on Megazip have to settle for third overall.

There was no stopping Phoenix (DEN) this week with Neils Degenkolw and his multinational crew romping to seven wins from seven races, and their fourth consecutive Cape Panwa Hotel Phuket Raceweek title. The two Platus in IRC II enjoyed some close racing, swapping places throughout and it was Sydney Premier Karting Park (AUS) who had the best final day and with it they secured second place overall. The Dragon (AUS) finished three points back and had to settle for third, overall.

Two shorter races today for Cruising Monohull threw the class wide open. Coming into the final day Lady Bubbly (AUS) was in the driving seat at the top of the standings, but struggled on today's shorter courses. Stepping up, a 1,2 for BeauX Esprits (AUS) tied them with Lady Bubbly (AUS) and the count back broke in their favour – final places are BeauX Esprits second and Lady Bubbly third.

Four out of the seven entries competing in Multihull Racing have been on the podium this week, showing the calibre of the crews across a variety of conditions. Getting their series off to a flying start with three wins, the Australian-designed-Phuket-built Phantom V (AUS) fell off the pace a little on the final day but their 2,3,1 scoreline was enough to keep them on top and claim the Multihull Racing title at the second time of trying.

The former Fugazi (new re-badged Bonza and under new ownership) got the better of the new Fugazi (GBR) finishing second and third overall respectively.

Twin Sharks (GBR) have been a long time proponent of the Firefly 850 class and have been a top performer over the years. Having dominated Cape Panwa Hotel Phuket Raceweek for a number of years, their arch rival Voodoo (GER) had them on the ropes early in the series this year. A string of first and second places saw Voodoo leading coming into the final day. A long race followed by two shorter races mixed things up for the five one-design entries and the Twin Sharks team found another gear – three wins on the final day saw them power away to win the class and make it eight wins in a row at Cape Panwa Hotel Phuket Raceweek.

With Voodoo comfortable in second, the race for third place was on. Surf Patrol (AUS) and Moto Inzi (FRA) traded places throughout the regatta but it was Surf Patrol who had the better final day, tieing with Moto Inzi and winning courtesy of their three third places to Moto Inzi's two.

Day 4_CPHPRW2019 (2)_l.jpg
There was close racing across all the classes. Photo by Guy Nowell.

The 16th edition of Cape Panwa Hotel Phuket Raceweek wrapped up with a lavish beachfront party presided over by Admiral Naris Pratoomsuwan, President of the Yachting Racing Association of Thailand, and hosted by Cape Panwa Hotel.

For full results, go to https://phuketraceweek.com/results.php.