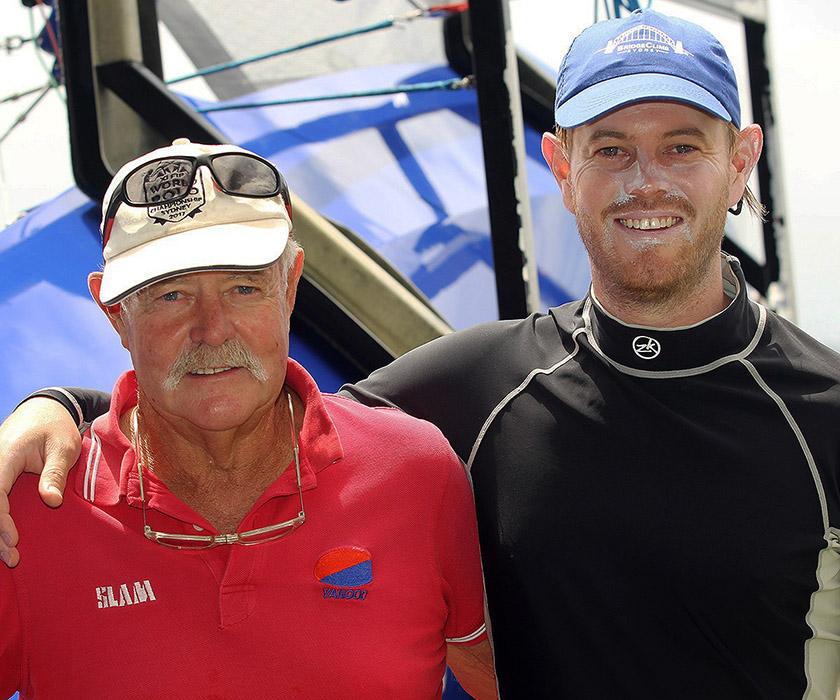 The ongoing success of Australia’s iconic 128-year-old sport of 18ft Skiff Racing on Sydney Harbour, owes much to the incredible action and support of John (Woody) Winning, the Winning family and the Winning family’s business.

John is a Giltinan world champion as well as an International and Australian Championship winner.  He has also been the President of the Australian 18 Footers League for the past 17 years and responsible for the sport’s stability and success.

'Woody' has not only been the major influence in 18ft Skiff Racing on Sydney Harbour over the past 20 years, or more, he is still an active competitor in both the modern and historical (1910-1950s style 18s) fleets each weekend over the summer months.

He will again line up with the Australian 18 Footers League's 2020-2021 season fleet each Sunday in the famous Yandoo (red and blue oval) colour patch as well as skippering The Mistake in the Sydney Flying Squadron's historical fleet every Saturday.

John's son, John (Herman) Winning Jr. is hopeful that his business commitments will allow him enough time to compete against his father again, at the League, in the new season in his Winning Group skiff.

Both are products of the Vaucluse Amateur 12 Footer Sailing Club and both have impressive sailing records.

In the 18s, he won the JJ Giltinan world Championship in 2000 when he skippered AMP Centrepoint to victory with teammates Euan McNicol and Anthony (Jack) Young, and has won the Australian Championship as well as international 18ft Skiff championships in Europe, the USA and New Zealand.

'Woody' was also runner-up to the legendary 18 Footer champion Iain Murray in two JJ Giltinan world and three Australian 18 Footer championships, and his record would have been even greater had he not taken several years away from the 18s to concentrate on his business commitments.

John's international 18 Footer championships record includes three European championships (2001, 2004 and 2011), Mark Foy Trophy with Yandoo at Sonderborg, Denmark in 2011, the San Francisco International Championship in 2004 and the ANZAC Regatta at Auckland in 2010.

'Herman' won the 2002 World 29er Championship before moving into the 18ft Skiffs in 2006 with a skiff sponsored by the family's appliancesonline.com.aucompany.

Time-consuming business commitments have curtailed his career in the 18s, but despite the reduced opportunities he has still managed some impressive results against the world's best skiff teams at the Giltinan Championship.  His best placing to date was earlier this year, in Winning Group, when he finished runner-up to David McDiarmid's three-time championship-winning Honda Marine team.

In 1999, John was heavily involved in establishing the ‘Historical 18s’ fleet.

Former Australian 18 Footer champion and class historian, John 'Steamer' Stanley, who has known and sailed many times with 'Woody', recalls: “John and I went for a sail on a replica of Aberdare with Robert Tearne, who built the boat, and we were both hooked on the challenge of sailing on such a boat.  Woody had Robert build a replica of Australia I, the 1946-1947 Australian Champion, which included John’s father and his uncle Dick Winning in the champion crew.  That was the start of a rebuilding program to preserve and recreate the rich 18-Footer history.”

As usual, he was prepared to back his belief with his own cash and still owns or has an interest in five or six boats in the present historical fleet.

John first served as President of the Australian 18 Footers League from 1984-1985 but had to relinquish the position as this was the time he was becoming more involved as head of the family business.

When Mr. Eric Bowen, who took over the presidency from John in 1985, retired in 2003, John resumed the role at the League, and still holds the position today.  He is in the unique position of also being the President of the Sydney Flying Squadron.

The League’s fleet has flourished during the 2000s under John’s presidency.  In fact, it’s his personal as well as his family’s initiatives, and financial support, which has been such a significant part of the success.

John, his wife Kerrie, together with the late Bob Killick, were the original trio who created the video coverage of the League’s racing and the family business has been the major financial backer for each JJ Giltinan Championship since 2007.

John Stanley has nothing but the highest praise for 'Woody' the man and the champion sailor. “John ‘Woody’ Winning puts far more back into the sport than he takes out of it.  He is extremely generous with his time and money, and is always prepared to help fellow sailors or anyone who needs it.”

Mark Foy established an action-packed sport, and promoted it to the general public who had previously little knowledge of sailing, while James J Giltinan was a sports promoter responsible for initiating a world championship for the 18s.

John 'Woody' Winning has now consolidated the work of those men by ensuring the continuation of the class, through sponsorship by his family business and corporate associates, while promoting the racing with live-as-it-happens video coverage to the world.

“The 18 Footers lost two greats when both Mark Foy and James J Giltinan passed away in 1950.  ‘Woody’ came along in 1952, along with his father’s genes, but I think he had also been given some of Mark Foy’s and James J Giltinan’s genes to carry on their great foresight.”

18 Footers racing is fortunate that the success and longevity (128 years) it has had, was mainly due to the foresight, positive thinking and financial wisdom to promote the sport to the masses by three positive-thinking men.  So far, the class has been free from the negative, cost-cutting individuals who have sent numerous businesses and sporting organisations spiralling into oblivion.

We agree with John Stanley when he said, “Three cheers for Woody.”