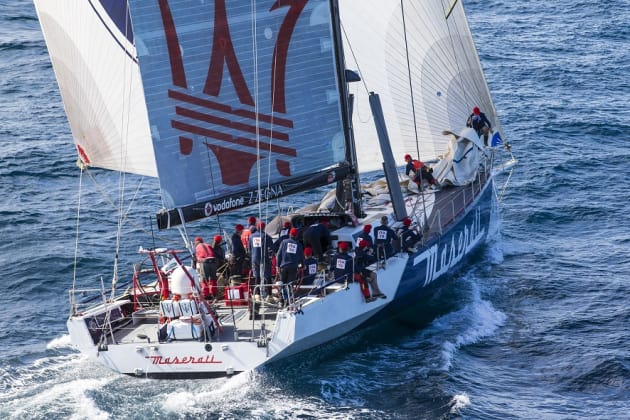 This weekend’s 180 nautical mile Cabbage Tree Island Race is the curtain raiser ahead of the Rolex Sydney Hobart Yacht Race, and entries are dominated by those yachts headed south on Boxing Day.

Hosted by the Cruising Yacht Club of Australia and starting on Sydney Harbour at 7:00pm on Friday evening, Race 4 of the Blue Water Pointscore is also a qualifier for the Rolex Sydney Hobart. It takes the fleet to Cabbage Tree Island, north of Sydney, and then return.

The same can be said for the Beneteaus in the fleet; three First 40’s – Ariel (Ron Forster/Phil Damp) Breakthrough (Mathew Vadas) and Robbo Robertson’s Bravo from Queensland, along with the Beneteau 45, Black Sheep, winner of October’s Newcastle Bass Island Race.

‘Golden Oldies’ with form are also on the radar should the going get tough; Love & War (Simon Kurts), Komatsu Azzurro (Shane Kearns) and Helsal 3 are all in good shape.

Two newcomers, also headed to Hobart, have got tongues wagging, as Ervin Vidor presents his new CNB 76, Charlotte, recently arrived from Europe and a repaired Ark323 is ready to make her major Australian offshore debut, after a dramatic exit from the Sydney Hobart last year when a collision at the start caused the TP52’s demise.

A new-look Ark323 crew has benefitted from a month of coaching and training with Damien Parkes, the owner/skipper of the JV52, Duende, which is also entered in the race.

Philosophers, the Cookson 12 purchased and given the treatment by Gordon Ketelbey and Peter Sorensen, has shown good early form, while Adrian Van Bellen’s J/122, Jackpot, a regular in the winner’s circle in shorter offshore races, could be in the money.

Based on current form, Jim Cooney’s V70 Maserati, Rupert Henry’s JV62 as well as Matt Allen’s TP52, Ichi Ban are in the chase for line honours. All are capable of taking the double of line and overall wins, but conditions will be the overriding factor for the trio and the rest of the fleet.

Predictions from the Bureau of Meteorology point to 15-20 knot northerlies on a south to south-easterly swell on Friday, making for a difficult ride north as the boats punch into the breeze against the swell. It is one for navigators and tacticians to ponder.

The northerly should continue into early Saturday, shifting south at 15 to 25 knots during the morning, tending south-easterly and lightening during the afternoon, the variety giving all a chance to succeed.

Competitors are racing for the 54th Halvorsen Brothers Trophy. The Halvorsen brothers were fixtures on the waterfront, renowned for the motor cruisers and yachts they designed, built and raced to victory in early Sydney Hobart races. Boats such as Solveig, Anitra V and Freya, the most famous, designed by Trygve and raced by he and Magnus to three unprecedented successive overall victories.