Burton and Stipanovic to go head-to-head in Melbourne 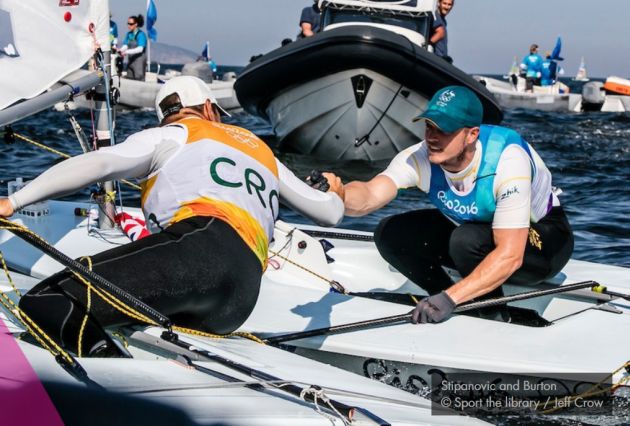 They may have settled some of their differences, but Olympic gold medallist Tom Burton says his Laser rivalry with Tonci Stipanovic will be on in earnest at the Sailing World Cup final in Melbourne.
A heated match race at a 2015 World Cup event in France ended in the protest room and saw Stipanovic copping a decisive disqualification that ultimately handed Burton the overall victory. The squabble also led to a feud between the pair that only thawed in the months leading up to this year's Olympics in Rio.

As fate would have it the rivals also found themselves duelling for gold in Brazil. Again Burton came out on top, this time after a stunning move on Stipanovic before the start line of the medal race that pushed his Croatian opponent into needing to make a crippling penalty turn.

Both Burton and Stipanovic will be in the hotly contested Laser class at the World Cup final off St Kilda Beach.

Burton said while the animosity between the pair had diminished, he added: "He's definitely not someone I would go hang out with generally. I think it's because we have more of a rivalry than other people I might hang out with normally.

"We have had some situations in the past where we've both been battling for regatta wins and we did have a bit of a falling out. But we got over that just before the Olympics. There's definitely a mutual respect there that's quite healthy now and we both know each other's abilities quite well.

"He's quite fit and raring to go so I'm sure we'll have another few tight battles."

Since the Olympics he has had surgery to repair his troublesome AC Joint and has also lost count of how many times he recounted "the move" on Stipanovic at speaking engagements.

But what hasn't changed is his profile.

"I can still definitely walk along and not be noticed," he said. "I had surgery and I had people asking what I do and I said 'I went to the Olympics' and they still didn't know.

"Once you explain it to them people might want to have a conversation with you, but I'm definitely not famous. We definitely need a greater media presence, not just in Australia but in general."

Burton has been to "six or seven" Melbourne regattas since making his Sail Melbourne debut in 2006.

The Sailing World Cup Final concept has only been around for two years, both of which were held in Abu Dhabi and both times Burton won the Laser class. To win three in a row, he said, would cap a stunning year.

"It's not just the extra cash that you get, but it's another thing to show everyone that you can compete at the highest level under pressure when it really matters," he said. "I'm not sure it's going to be the case this year with my preparation, but I'll give it a crack."