A solo sailor who was rescued eight hours after being pitched overboard in rough seas off Australia’s Northern Territory coastline has revealed details of his ordeal.

Southampton-born expat Nigel Fox, who has been praised by rescue services for the quick actions which saved his life, was located by an Australian Maritime Safety Authority (AMSA) aircraft 23 kilometres from his boat after activating the Ocean Signal rescueME PLB1 personal locator beacon attached to his life jacket.

Following an electrical storm and winds over 40 knots the previous night, the 55-year-old yachtsman was sailing his Duncanson 34, Bison, in continued bad weather in the notorious Arafura Sea, heading towards the Gove Peninsula as a planned stop on his way back to Cairns, when crossing swells knocked the yacht onto its beam ends and sent him into the water. Nigel was left hanging over the side of the yacht by his jack lines with his head submerged, but he managed to reach for his hook knife and cut the line to stop himself from drowning. After floating free, he was able to activate the PLB attached to his life jacket.

The beacon alert was received by AMSA, who pinpointed the distress signal 93 kilometres northeast from the remote town of Nhulunbuy. They notified the police in Darwin at 9.30am, who coordinated with Nhulunbuy water police to ready and then dispatch a vessel.

A Cobham Aviation Challenger SAR aircraft from Cairns, Queensland, located Nigel thanks to his 121.5 MHz homing beacon, with the AMSA crew accurately dropping a life raft, just a couple of metres from the sailor in the water, and establishing radio contact. It is the first time a solo raft has been deployed from an aircraft to a person in the water by AMSA crew.

The police rescue vessel with three crew arrived five hours after he was located and transported him to Gove District Hospital suffering from exhaustion and dehydration, as well as two broken ribs from the night prior. Nigel’s yacht was retrieved by friends in Nhulunbuy about 30 hours later. Thankfully, Nigel’s beloved cat, Stinky, his companion for over 15 years, was safely onboard.

Recovering well from the January 4 incident, Nigel, who learned to sail as a youngster on the Rivers Itchen and Test in the UK and is now an Australian citizen, said, “I survived because I was well prepared and took a hard, cold look at what could go wrong and what to put in place to rectify those worse-case scenarios, so you come out on top. A positive mind set is a must – you will survive, you will pull through.

“I would also say to everyone, please, please carry a PLB and, in busy waters, an MOB. It is the cheapest most effective life insurance you can buy after a quality life jacket. When you are in the water it’s too late. The sea is an unforgiving creature that will consume the ill prepared. There are no second chances in the ocean. You either go in prepared or become a statistic. If you think that’s bleak, death is really going to upset your day.”

Nigel has been sailing alone for three-and-a-half years, setting out from Geelong in Victoria, on Australia’s south coast, traveling north up the east coast of Australia, then on to Darwin, NT, where plans to continue to Indonesia were curtailed by the Covid crisis.

Waiting for the monsoon season to kick in, reversing the trade winds, Nigel could make progress back towards Cairns. However, this causes very rough sailing conditions, leading to the fateful incident. Nigel had called his main AMSA registered contact the night before to change his sail plan, while 30-minute location updates from his sat phone helped rescue activities with the position of the yacht’s latitude and longitude.

He emphasises the importance of intimate knowledge of safety equipment, how to use it and its position at all times. He said, “When I needed to use my equipment, it became pure instinct. This saved my life, from using the hook knife to cut free, to then adjusting my life jacket for optimum fit while floating, to locating my PLB in its pouch. I could not see properly, but I knew which steps to perform before pushing the activation button. With the boat quickly moving away and the current taking me southeast at about 2.5knots, staying positive was then my primary priority.”

Nigel also revealed his emotions after hitting the water as he awaited rescue, adding, “On top of the regular swell of 2 to 3 metres, it was a second swell at about 90˚ to the main one which put the yacht on its beam ends and pitched me over the side, roughly east of the Cumberland strait at the Wessels, which has tidal movements of up to 12 knots.

"I have no idea how long I was in the water. The water temperature was around 31˚C, but after a couple of hours I occupied myself with rolling down shirt sleeves and doing up the cuffs in response to potential hyperthermia. It’s pretty thick with Tiger sharks up here, so all movements were carried out under the water to minimise splashing or making a noise. Then there are salt water crocodiles and the Irukandji, a type of jelly fish, which are very nasty.

"I also had to block any thoughts about my cat and the loss of the one thing left in my life I absolutely love to bits. It was down to the gods at that stage, but Neptune steered her away from danger to a safe spot to be rescued.” 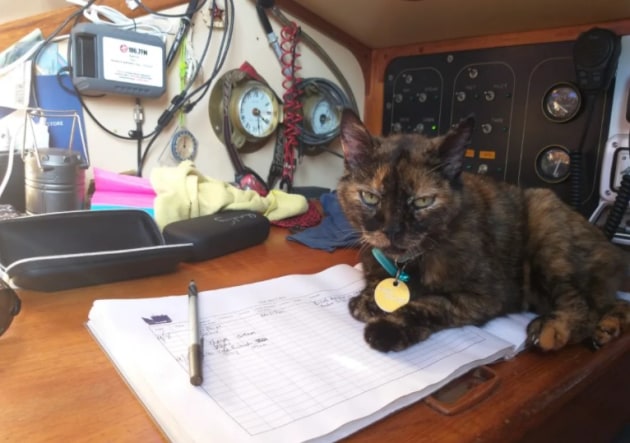 In a report in ABC News, St John Ambulance NT Acting Superintendent Michael Milde said the rescue had been a great team effort in challenging conditions that had "saved this man's life".

"The actions of the yachty himself are also to be commended. The fact that he was wearing a life jacket which had a personal locator beacon attached highlighted the importance of carrying and correctly utilising the correct safety equipment whilst at sea. The end result would have been tragic if not for this equipment," he said.